Greetings Terrans, I have another little trip to Spero Secundus in store for you today. This time, it’s a visit to Hive Platus, the second hive city on the planet, ruled over by the decadent House Sevelli. Here we have a small squad of House Sevelli Guardsmen:

The officer is a Valhallan I think – he had a head swap with an old Curious Constructs piece to give him that snazzy helmet and plume. The remainder are based on the classic Praetorians, just with a bit of sculpting work on their helmets to help them match the officer. The kneeling guy was a loader without a corresponding gunner, so I did a little more to turn him into a radio operator. I need to add an antenna, but he’ll do for now.

The painting was good fun – I experimented with the colours until I arrived at this rather French looking scheme which I think is just delicious. I also settled on a darker North African skin tone as Hive Platus is in the warm southern part of Spero Secundus… Yes, I know the sunshine levels are irrelevant when you live in a hive, but the richer skin tone works beautifully with the blue and gold, so screw you logic – I’m running with it!

I have about 24 more of these guys to do, and then I’m back to building and undercoating. Near-term plans include more mutant cannibals, (characters, including a witch), lots of civilians of all kind, and I need to crack on with my Daemon Ink warband too. Onwards and upwards!!

Greetings Terrans, and sorry it has taken such a long time to get this done – life got very busy recently, and I had a bit of painter’s block as well, but we’re all on track this week, so welcome to the second post where I share my efforts to populate my made-up Imperial world Spero Secundus! This time, we are venturing deep into the sump of Hive Terminus… Now, a bit of background for you – Terminus is an interesting place in my made-up Imperial world… Originally, it was one of three hive cities on Spero Secundus’ single continent, it was nuked by Hive Sevelli a century or more ago, marking the close of a nasty civil war. Terminus was reduced to a 100 mile wide pile of irradiated rubble surrounded by miles of radioactive desert where the sand had been fused into glass. However, beneath the surface of the rubble, several domes remained intact, and they became the desperate battleground of the survivors of the nuclear storm… Basically, it’s a super-fun sandbox for me as a GM, and my party had a blast hunting Sump-Spiders and fighting off hordes of cannibal rad-mutants… it is these rad-mutants that are the subject of this post.

When mulling over what to use as rad-mutants, my thoughts inevitably went to the Nurgle range (pox-walkers and so on), but I really didn’t want to go buy any new models… besides, the pox-walkers are pretty well defined as what they are, and I didn’t think them generic enough. I also thought about the old Zombie kit, but that kit really is a bit of a stinker (pun intended) and is long overdue an overhaul… Then I remembered that I had an old ‘Escape from Goblin Town’ set from The Hobbit range. I figured that the malformed little shits in that box would be perfect for generic rad-mutants, and looking through the box confirmed my suspicions. The sculpts are a little weird – they are all single pose one piece affairs, with odd bits of poor definition here and there… I suspect this is a by-product of the production approach that GW used for this rabble… they are ridiculously inexpensive, and you really do get an awful lot for your money… even now, 36 of these fellas can be bought for a mere £30!!

I also had the Goblin King’s Captain and Lieutenant to paint and add to the mob, plus I decided to paint the King himself, though more as a painting exercise than with any gaming application in mind. All in all, this gave me 39 models to paint, so not a trivial task. I did toy with the idea of 40k-ifying them, but decided against in in the end… I kinda like that they are generic enough as they are, and wouldn’t want to root them too firmly in any particular genre or system. I also briefly considered converting out the duplicates, but I didn’t bother in the end… I didn’t think the juice would be worth the squeeze, and I just couldn’t be arsed! (I did use some technical paints to add some texture here and there, but hardly what I would call a conversion). Anyway, here they are in all their glory:

They all got the same basic treatment with the paint brush – a white zenithal spray over black undercoat followed by either a purple or crimson wash all over. The flesh was highlighted up with Rakarth Flesh and then a white glaze, while the wood & leather was picked out in Snakebite Leather contrast paint. Boils and pustules got a yellow wash, and the metal work & bone was picked out in my usual way. Finally, I picked out the eyes & teeth, and added some blue or green wash here & there (like a spot of blue shade under the eyes for example), and used a dab more crimson wash for particularly sore bits… The Goblin King had much more attention paid to him, and was really a very nice exercise in blending nasty looking flesh tones: 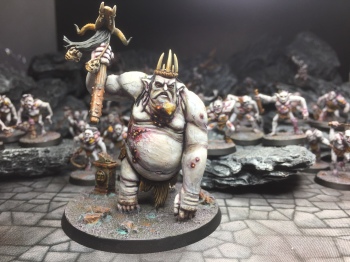 Here are a few different genre shots to show how versatile they are:

Anyhow, that’s all for now – I’ll be continuing with the drive to populate Spero Secundus next time with a visit to Hive Verento!