Greetings fellow aironauts, and welcome to the first ‘proper’ post of the year on Leadballoony. I really haven’t had that much time for hobbying over the Christmas break – it was a pretty busy time, but I did manage a few bits and bobs, starting with a few jungle bases:

This is a continuation of my side project to create some psychedelic jungle terrain, and is meant to provide some really dense patches of bush (fnarr fnarr) with small paths wending their way through. Placing minis on said path is a bit of a bugger, but is absolutely doable. There will be plenty more to follow on this project, so expect to see the odd bit of jungle turning up over the coming months!

Next up we have some unplanned and unexpected Primaris Space Marines… yeah, random! There is an explanation though – my youngest son surprised me a few days before ‘the big day’ by asking for some…  He was quite clear that we needed some real ‘goodies’ in the collection, and that the heroically proportioned and clean-cut Marines were the way to go: 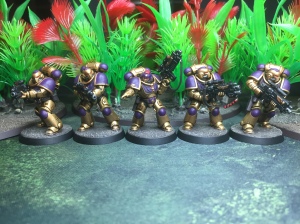 We (I) got them built and undercoated gold over the break, but my boy dictated the weapon loadout & colour scheme, as well as doing all the drybrushing & inkwashing. It was great to see him totally absorbed by the process, and I have a feeling that he might get into the hobby as he gets older:

There is no specific chapter in mind for these guys – my boy wanted to do his own colour scheme, so the purple & gold is very much ‘rule of cool’. I reckon it looks rather smart! I specifically left out some of the finer details, (like highlights on the coloured panels and chapter iconography), just so that they can be improved at some point in the future. No doubt my son and I will slowly grow this small band of brothers as the year progresses, and I’m actually looking forward to doing some more – they are really rather nice to paint! Unlike a lot of folks, I don’t have any skin in the Astartes game, so I was actually happy to see correctly proportioned Marines hit the market… There. I’ve said it… I’m coming out as a secret Primaris fan. Hell, I can even largely ignore the awful & clunky fluff that justifies their existence! As far as I am concerned, this is what Marines look like now – indeed, they should always have been this big, so this as-yet unnamed chapter will be entirely made up of Primaris. Here are a few fun pics of them engaging some wily Eru-Kin on some distant death-world: 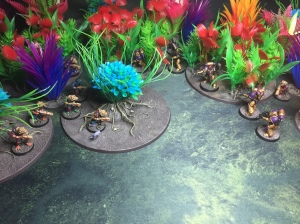 It hasn’t all been space jungle & giant Marines over the holiday though, there has also been the ‘small’ matter of Azazel’s ‘Painting Decembruary’ challenge… Happily, my version of Arkhan is progressing very nicely – the build is finished and I have started adding colour, but I’m keeping all that under wraps for now so you’ll have to settle for more B&W for the time being: 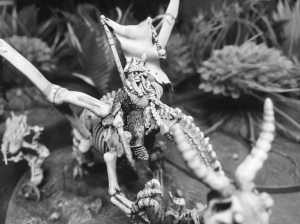 That’s it for now folks, hope you enjoyed the post & catch you all soon!