Greetings Terrans – a second post in one week! You lucky buggers :-)

It’s just a quickie today – I had another Wolf Time Ork Skwad close to being done, so I had a wee push to get them over the finish line last night. This is actually the last ‘combat unit’ required for the campaign, but is a bit different to all the other combat units & only appears in scenario 3… Firstly, the unit has Bolters and Bolt Pistols, second the leader has a hand flamer, and thirdly the unit has no Heavy Bolter…  The sharp eyed and knowledgeable among you will have spotted the Heavy B Ork, but no, that actual Heavy Bolter won’t be played as one – to be fair, it is pretty tiny, and I didn’t realise it was a Heavy B until it was too late… Fuck it… it’ll have to count as a snazzy regular Bolter :-)

I trawled my paint draw for a spot colour, and ended up with this bluey-green Dark Eldar colour… Thus we have ‘da Real Teal Skwad!’: 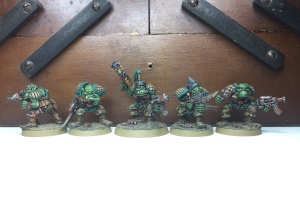 While I was feelin’ Orky, I revisited the 4 ‘Combat units’ that I painted on my hols & just quickly added some green glaze to the flesh tones… Then I thought I might as well dig out the three ‘Warrior Units’ as well, and take a few pics of the whole lot together: 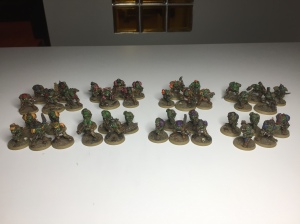 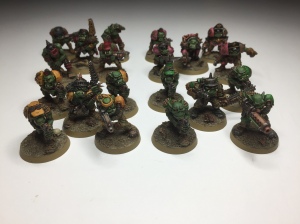 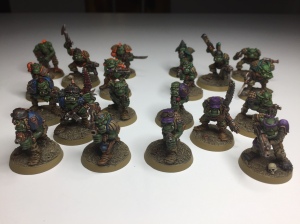 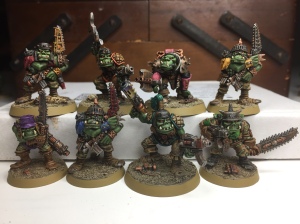 So, that’s it for now – three months in to the project, and we’re 40 down, 60ish to go… It starts to get more complicated from her on in, with almost everything needing to be converted (heavily in some cases). I’m also away from my paints quite a bit in October so my output will be a bit patchy for the next few weeks, but fear not – the Waaagh must go on!