Greetings Terrans – last post before I head off to BOYL, so I thought I’d do a quick wrap-up of the last few bits I managed to rush through this week. Nothing stellar here, just quick and easy stuff: 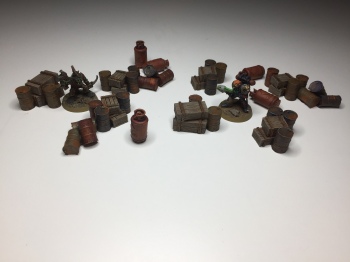 Shed for game 3 – supposed to be a storage shed, but I thought I’d have some fun with it & make the quintessential ‘I’d give it a minute if I were you’ type of convenience that an Ork might favour: 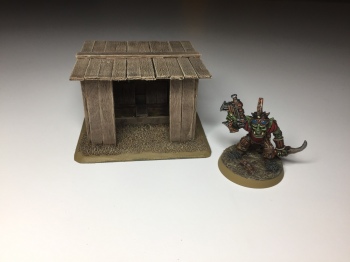 ‘Rock Forest’, also for game 3 – these will be on a volcanic game mat, hence the colour: 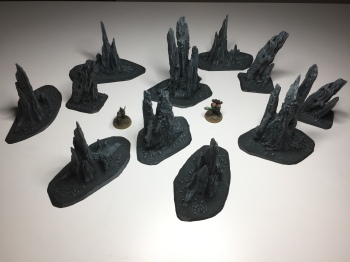 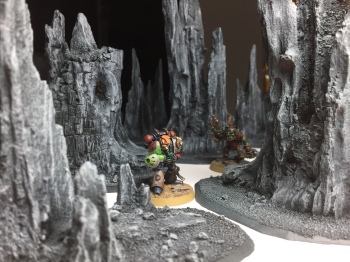 ‘Fighting pit’ for the dungeon level of Kulo’s Castle. Obviously, I can’t dig a pit in my game board, so I made a fighting cage instead: 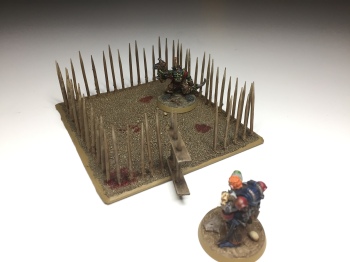 Examination table for da Doc’s room (or possibly a torture table for the torture room):

Simple ‘gravity lifts’ to connect the levels of Kulo’s Castle: 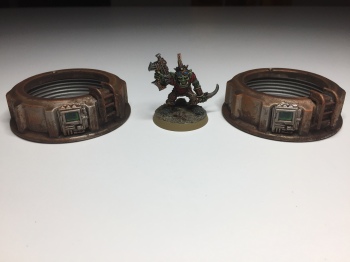 Landing pad – Part of the top level of Kulo’s Castle, but it can only be reached from the air so only the Marine Jet Bikes can actually use it. The stairs are also separate, and can be used for the main stairs in the dungeon level: 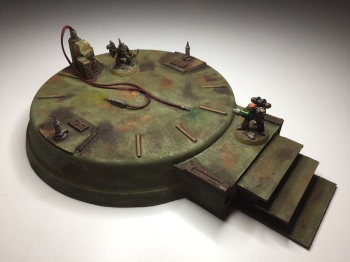 Benches and tables for the Great Hall: 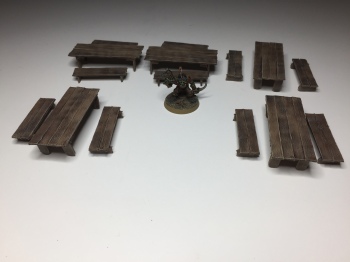 And finally, a rather stained & unsanitary bed for Kulo’s sleeping chamber: 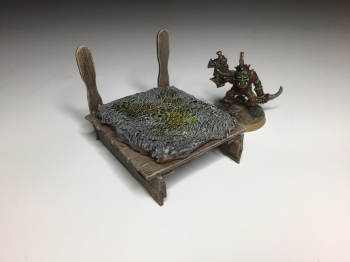 Phew! So that’s it folks, the build & paint part of the Wolf Time project is officially done! I didn’t have time to do everything I would’ve liked to do – I would’ve loved to have a load of cupboards, lockers, bookcases, shelves of ‘stuff’ etc. but I just ran out of time. That said, I reckon we’ll be ok with all these items and with the awesome bits that other folks are kindly bringing along.

Next time I post it’ll be on the campaign itself – I’m really looking forward to the games, but it is also strange to think that the whole thing will be over soon… Endings are a funny thing – it’ll be the culmination of almost a year of work and focus, so very rewarding, but also sad to be finished in a way. I’ve learned a hell of a lot over the course of this project – there has been a shitload of organising, researching, painting, sculpting, building and collaborating. There have been many ups and downs, but one constant has been the encouragement & motivation I’ve received from you guys out there in the interwebs and in real life too – even non-gamer friends & family have been cheering me on! I want to formally thank all of those that encouraged and supported me… this is as much down to you guys as it is to me.

Right, that’s enough of the soppy stuff, I’m off to pack the car & get ready to hit the road in the morning. I’m doing all day at Warhammer World tomorrow, and then heading to Newark for the long weekend. Hopefully see some of you around over the weekend!  😊

Leave a Reply to Mark A. Morin Cancel reply