Greetings Terrans, I have another little trip to Spero Secundus in store for you today. This time, it’s a visit to Hive Platus, the second hive city on the planet, ruled over by the decadent House Sevelli. Here we have a small squad of House Sevelli Guardsmen: 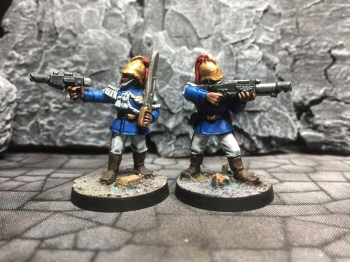 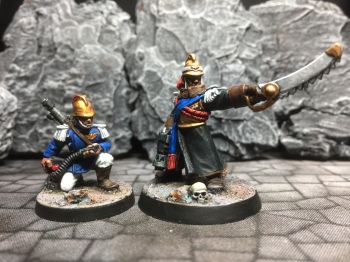 The officer is a Valhallan I think – he had a head swap with an old Curious Constructs piece to give him that snazzy helmet and plume. The remainder are based on the classic Praetorians, just with a bit of sculpting work on their helmets to help them match the officer. The kneeling guy was a loader without a corresponding gunner, so I did a little more to turn him into a radio operator. I need to add an antenna, but he’ll do for now.

The painting was good fun – I experimented with the colours until I arrived at this rather French looking scheme which I think is just delicious. I also settled on a darker North African skin tone as Hive Platus is in the warm southern part of Spero Secundus… Yes, I know the sunshine levels are irrelevant when you live in a hive, but the richer skin tone works beautifully with the blue and gold, so screw you logic – I’m running with it!

I have about 24 more of these guys to do, and then I’m back to building and undercoating. Near-term plans include more mutant cannibals, (characters, including a witch), lots of civilians of all kind, and I need to crack on with my Daemon Ink warband too. Onwards and upwards!!