Hello chaps, I’m delighted to present my first effort for the Rogue Quest project that JB (Leadplague) and Jon (Magpieandoldlead) kicked off – I shamelessly crashed the party, (thanks guys!), so by Christmas we’re looking to build a six-strong adventuring party that portrays six of the classic dungeon crawler tropes… the trick is that they need to draw on Rogue Trader/confrontation inspiration and influences, and fit in with the RT universe. We get to choose from the following list:

Now, I got really excited about this concept – it’s the sort of thing that forces you to look at the lead pile a little differently, and to maybe consider picking up models that you might not otherwise be looking to paint. I certainly found that to be the case for my first submission – a Rogue Quest Thief. The model comes from the Spacelords ‘Personalities and Civilians’ range (set 3706, available on Moonraker Miniatures) – a lovely little range that Jon brought to my attention. I must be honest, I completely overlooked this range at the first pass, but I just kept coming back to one particular miniature… he manages to look shifty, and also strangely innocent to me, and he has a pet cyber-monkey that no doubt allows him to access areas that are strictly off-limits! I decided to give him a go, and added a Scion dagger to at least have something of the 40k universe on his person.

Once he was based and undercoated, I took a good look at his face – he’s got a bit of a monkey-like look to him, or at least something not quite human… I started mulling over different flesh colours, and decided to go with the dark red you see here. The tail got added as an afterthought, just to make it clear that he isn’t human and to tie him in more with his pet. It’s the first time I’ve converted something that was already being painted, but I’m glad I did it because I think it gives him a slight resemblance to Nightcrawler, (a firm favorite of mine!). 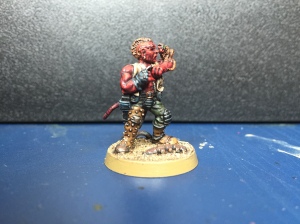 And here’s his background:

‘Veela hails from the forest moon of Scorpio 4 – an unremarkable little world of no strategic or material value, the Scorpio system has been practically ignored by the wider galaxy. Veela’s people have existed for thousands of years in a state of technological primitivism – not through lack of intelligence or skill, but simply because there was no imperative to develop beyond a simple level of civilisation – they had all that they wanted or needed. They were a peaceful arboreal species who trod lightly upon their world, but sadly, this peaceful existence was shattered when a detached tendril of a passing Tyranid hive fleet happened to touch upon their world – the voracious creatures began to devour the forests and all life within them. There was no defence against the tide and extinction was almost assured, though Veela was far removed from the initial outbreak and was unaware of the danger.

Meanwhile, Rogue Trader Arturo Lamina received a lucrative contract to escort a prominent xeno-biologist to Scorpio 4 so that he could study and document the early stages of a Tyranid incursion. The contract was mostly focused on orbital observation, but a couple of field trips to areas far ahead of the Tyranid swarm were judged worthwhile. It was on one of these trips that Arturo and his crew were ambushed by a Tyranid biomorph that was ranging far ahead of the main body of the swarm. Shots were fired and lives were lost before Arturo and the survivors could get back to their lander and get off-world to the safety of their ship… In the confusion, they also managed to pick up a stowaway!

Veela was always a curious young man, and couldn’t help himself when one day, the peace of the forest was shattered by the scream of a vast metal bird as it settled in a clearing near to his home nest – his lifelong pet Chicho the monkey tagged along, and the pair went to investigate this strange happening. He discovered the metal bird settled in a clearing, strange peoples coming and going from the beast’s belly. Veela wanted a closer look, and waited for an opportune moment to venture down to the beast to take a look inside. Soon, the strange people had ventured away and the coast was clear! He crept down to the metal bird, and carefully ascertained that it was asleep before sneaking inside to have a good look around. Veela was just investigating a particularly interesting storage locker and the clothes that it contained, when he heard shouting, banging and screaming from outside. Footsteps pounded up into the beast, and Veela was forced to hide as the bird began to roar into wakefulness. With growing alarm, Veela realised that the bird was taking flight with him and Chicho inside! In panic, he tried to escape, but it was too late… the way was blocked by the strange people, and they soon had him cornered. Veela was certain that he was going to be killed – the strangers did not seem pleased to see him, and they shouted in a language he did not understand while pointed shiny metallic sticks at him as the bird shook and began to fly. After a few minutes a large individual is a suit of metal arrived and appeared to take charge of the situation. The metal man removed his head-shell, and offered Veela water and comfort. He looked sad, Veela thought.

Shortly, the metal bird arrived at what Veela assumed was its nest – a huge metal cave where all the strangers lived together, along with many more of their kind. Veela was given a nesting box of his own, and saw many strange and frightening things in those first few months, but as time went by he grew less afraid and even began to learn a little of the speech used by the strangers. It was during this time Arturo, the man who had first offered him comfort, began to visit him regularly. From these visits Veela learned of the existence of the wider galaxy, and of the many dangers that is contained. The culture shock would have broken most people, but Veela was resilient and curious. Arturo also asked may questions of Veela, and seemed to delight in the tricks of balance, agility and stealth that came so naturally to Veela. As time went by, Veela grew to worship Arturo. One day, Arturo came to him, and led him to a part of the nest he called ‘the bridge’. Veela was stunned to see a holographical representation of a barren rocky orb in the vastness of space. He asked what it was, and with great sadness, Arturo explained that it was Veela’s home. By now, the Tyranid invasion had stripped the moon of all biological life, and Arturo had the awful task of explaining this – Veela and Chicho were the last living creatures to survive from Scorpio 4. Veela wept as a vast explosion consumed his now-dead world, for Arturo had summoned the Imperial Navy to deliver the blessing of Exterminatus to the moon.

Veela recognised that Arturo had saved him, and swore to serve the Rogue Trader to his last breath. Arturo accepted Veela into his service, explaining that his and Chicho’s stealth and cunning were valuable gifts. Veela sealed the pact with the offer of two sacred feathers that he had been carrying when he first stowed away, and Arturo still wears these on his armour with pride. For his part, Arturo has gifted Veela and Chico with several advanced cybernetic implants that allow Veela to link more closely with his pet – seeing what Chicho sees, hearing what he hears. The natural stealth and agility of the pair make them ideally suited to espionage and theft – skills which are always welcomed and valued in any Rogue Trader’s retinue.’ 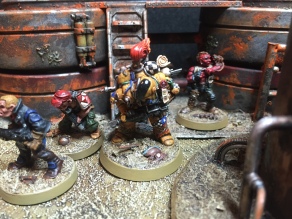 Arturo and some hired henchmen create a distraction while Veela and Chicho prepare to embark on some skulduggery!

So there we go! Hopefully Veela meets the criteria for the Rogue Quest project, and as a bonus, he doubles up as a pretty cool companion for my Rogue Trader! :-)