Hi all, I have a little bit of daftness for you today – a small experiment if you will. I have been unlucky enough to be a bit ill this week, but it was the best kind of illness – the kind that keeps you off work but doesn’t stop you painting! I decided to experiment with a few minis that are not 40k/RT, or even sci-fi, and attempt to make them usable as RT civvies. Firstly, I quickly converted and painted up these two characters – anchor woman ‘Rhonda Burgundy’ and her trusty cameraman, bringing you all the latest news and traffic from the hive cities of Spero Secundus. Rhonda really likes to stand out from the crowd with her outrageous outfits, and is a big hit on the upper-Spire vid feeds – channel 80. Some die-hard brat-fans have adopted her style, and refer to it as ‘80’s fashion’ after the channel. The minis are from Moonraker’s ‘suits and street people’ range – they got a bit of light 40k-ification to help them to fit the setting a little better, and then a quick brush-job to get them on the table. It’s all very tongue-in-cheek and a bit of fun :-)

Next up we have Dr. ‘Hraxi Jonas’ (centre), the famous xeno-archaeologist and galactic adventurer. A little known fact about Jonas is his hatred of a nut based delicacy on his homeworld of Hrax, called ‘Nutzi’… Hraxi Jonas is accompanied by his trusted assistants ‘Knuckles’ (left), and Samwise Short-Round (right). Knuckles isn’t the sharpest hyper-scalpel in the box, but he’s loyal, and as strong as a Mukaali, (which comes in handy if ‘The Doc’ needs some heads banged together). Short-Round is a sneaky little bugger, adept at getting into places where he shouldn’t be – usually with a view to relieving people of their property. Short-Round is also bizarrely obsessed when it comes to academic achievement and status… He insists that strangers address the Doctor by his professional title, and has been known to punch them in the unmentionables if they don’t!

Hraxi Jonas is the Archaeologist from the old Talisman Timescape range – he’s a stunning piece, and one that I didn’t want to mess with at all… why would you, right? Short-Round is fantasy Halfling ‘Willy’ from WD 96 (£2.50 for 7!!!)… Short-Round got a mild bit of conversion, but nothing heavy. Knuckles is another mini from Moonraker’s ‘suits and street people’ range, no conversion work here, just a quick and easy paint job.

So there we go, a little dip into the slightly daft. One last picture of Rhonda interviewing Hraxi Jonas: 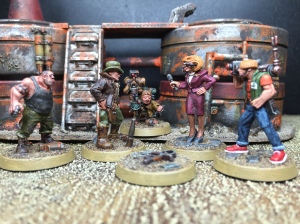 Rhonda: “So, ‘Hraxi  Jonas’, what can you tell channel 80 News about the alien artifact that you’ve discovered?”