Hello chaps, my BOYL buzz has receded as the week has progressed, but I did get a few bits and bobs finished last week/weekend. First up, we have a nice little Freebee from Curtis @ Ramshackle games – he’s a generic priest/administratum type, appropriately/amusingly equipped with an old hammer. I added the servoskull to 40k him up a bit, and painted him quick to hang with my slowly expanding Administratum group: 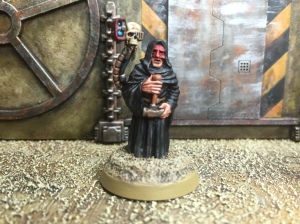 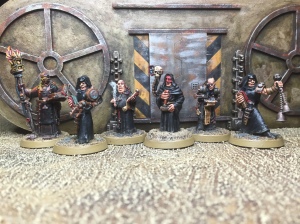 Next up we have a random chap that has been in his undercoat for ages and ages – I just never got around to him, despite the fact that he is such a cool model. He is from Moonraker Miniatures I think, and he’s a cracking little wasteland/bounty hunter type. I painted him up in quite a muted palette, with no particular purpose in mind. Here he is on his own, and with a bunch of reprobates from the RT Pirates range: 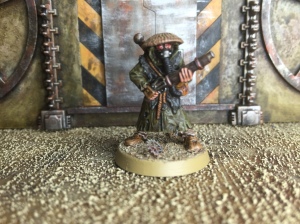 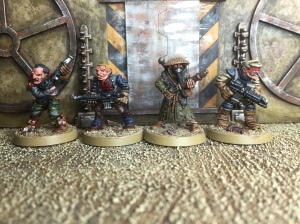 Finally we have another BOYL gem. He’s actually an impulse purchase from Johnny Lauck – I backed a recent Kickstarter by Johnny, (a very cool series of undead dungeon monsters – watch this space!), and I added a few sci-fi minis that he also produces to the order. You can check Johnny out here, but suffice to say that the quality and service were both excellent, though I did cop a customs bill for the delivery :-(

Anyway, I actually picked up the KS package on my way to BOYL, and had a good look over the minis on the Friday night. I knew that the mighty Kev ‘GoblinMaster’ Adams was going to be at BOYL on the Saturday, and would be sculpting faces for folks in exchange for a modest donation to charity. I selected a rather cool mini with a disc cutter and blow torch with the Kev face sculpt in mind. This is what poor Kev had to work with:

And here is the resulting mini with my face!

Pretty good eh? This guy is going to go very nicely with my Colony 87 Star Port crew, (coming soon), but he can hang with my conversion of Techpriest Schlan for now, and just chop some shit up:

It was great watching Kev work – the guy is a legend, and it was fascinating to watch him building up the face, sculpting in the detail etc. He sat in a hot tent all day long, sculpting and chatting with folks about all sorts, and all done with a broken arm! The conversation was great, so many rock’n’roll stories from the golden age of GW, and a fair few of Kev’s own adventures since. For example, did you know that Kev’s Night Goblins were inspired by the Jawa from Star Wars? No? Me either! (Sure makes me look at that range a bit differently…)

Anyway, that’s it for now, but I’ll be churning out some more random bits over the coming weeks. I’ve kind of parked the whole Silver Tower set for now – it wasn’t bringing me much pleasure tbh, so I’m going to crack on with some of the many Kickstarters that have been fulfilled lately. Expect RT civilians, random undead, hordes of robots, and lizard men in spaaaaace! Catch you on the flip side.

12 thoughts on “More BOYL booty, and a random…”