Greetings Earthlings! I come in peace, and have a quick post for you today – I’ve had a bit of a monster painting session over the weekend, and have no fewer than 18 painted models to show for it! First up are a couple of fishmen that I picked up at BOYL – quirky little sculpts, nice and easy to paint up: 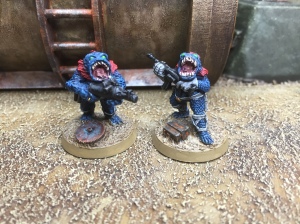 They were fun to paint, mostly done with washes and a quick drybrush, so nothing too demanding. I have no specific plan for them, so they can just hang with the rest of my galactic scum. My league of Xeno adventurers is growing! 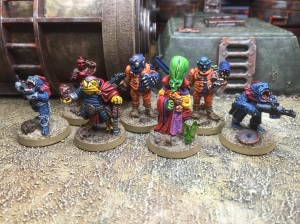 Secondly, I have a bumper haul of 16 Johnny Lauck droids to share, (you can see details about Johnny in my last post), hence the post title. Droids… chips… computer chips…? oh, never mind :-/      Anyway, I speedpainted them up with no great attention to detail – simple colour blocks, wash, drybrush, weathering, done. I plan to use them as scenery items or plot points rather than characters in their own right, so I treated them as such. I painted five up each in blue, red and yellow, and I singled out one chap to be some sort of protocol droid ;-) 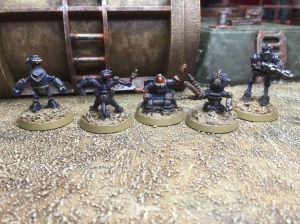 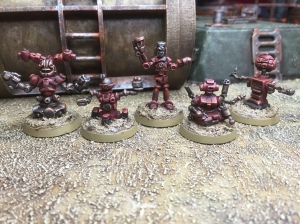 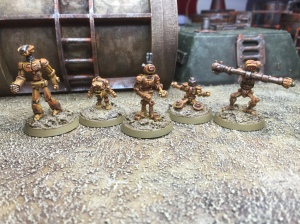 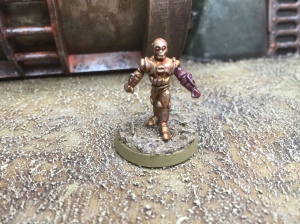 Here, protocol droid ‘AR53’ attempts to diffuse a tense situation between Hraxi Jonas and a couple of fishy customers… apparently only one of the aliens appreciates Mum jokes! 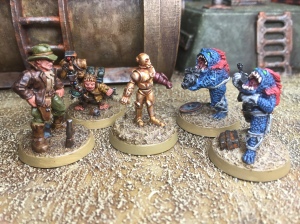 I love these little critters, and was instantly hooked on these when I saw them available on the undead kickstarter. I really like the idea of little civilianised droids bumbling around the place… probably something to do with growing up a long time ago, with my head stuck in a galaxy far far away :-)   Some of these guys do look weaponised, but they can equally be drinks dispensers, fire extinguishers, hoovers, fumigators, etc.  I’ll go back and add fine detail as and when the mood takes me, but I’m calling them done for now.

So that’s it for the time being – what a productive weekend! I have an assignment to write over the next couple of weeks, so painting time is going to somewhat limited for a while. That said, I’m sure I’ll manage a bit of painting here and there ;-)   Catch you sucker DJs on the B side

23 thoughts on “Two portions of fish, and a huge bag of chips please”