Hi guys, I’ve had a busy weekend but managed to squeeze in a game of Blood Bowl, wrap up the second of my Ostium Guides for the Chapel project, and advanced the paint-job on a few more trees for the same. No news on my Exodite warband as yet – I need to study some sculpting techniques before I take them any further. I’ll chuck a few words up on the match today, as I haven’t photographed my second Guide yet, and the trees are still WIP. Feel free to skip this if Blood Bowl ain’t your thang, but do pop back later in the week, because I’ll be posting on the Chapel stuff as the week progresses :-)

So, Blood Bowl! This was an exciting event because it was the first run-out for my Clockwork Orange team – in fact, this was my first game with undead, my first game with a painted side, and I scored my first touchdown! I am very much a novice at this game, having only played once before as an adult, but I feel that I am slowly getting the hang of it. That is a huge testament to my pal Ross and his patient, (and lenient), support! We played out a gruelling but enjoyable 1-1 draw, with Ross and his Orcs receiving the first kick-off and taking six turns to grind downfield for the first touchdown. That didn’t leave me much time to do anything in the first half, (other than crump some heads), so I had to wait for the second half to get my score on the board. I took the kick-off and caged my way down the field, before cutting loose with a speedy Ghoul. I managed my score in five turns, so that gave Ross a chance to come back at me in the last quarter. By this stage, he had a few players off the field, whereas I had been lucky with all my regenerate rolls and had a full team on the pitch. With a nice numerical advantage, I managed to stop his drive close to the half way line, knocked the ball loose and miraculously caught it. I just needed to hand the ball off to one of my speedsters to be in with a chance of pinching a late winning touchdown, and…. I fluffed the hand-off. Ultimately, a 1-1 draw felt about right – a late win would have been harsh on Ross, and the draw meant that the game was fun for both of us.

The highlight of the game for me was getting a blitz and push-back on one Orc that ended up pushing two others and dumping the last one off the pitch! Lowlight was throwing a 3 dice block, not getting a knock-down that I really needed, and then having to burn the re-roll that might have won me the game at the end. *sigh*   But hey, that’s Blood Bowl! I think I may be falling in love with the game – it is such an elegant system, and is the quintessential ‘easy to learn and difficult to master’ type of affair… frustrating as hell at times, but just so much fun :-)

Here’s a couple of pics, including Ross’ lovely Oldhammer Orcs: 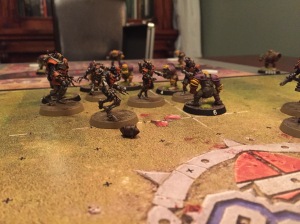 LET’S GET READY TO FUMBLE!

Here are some things wot I learned about the game, and about the respective teams:

4: Regenerate is great – I was still at full strength at the end of the match!

5: Figuring out how to best lend assists is the trickiest bit of the game, and…

6: Working through actions in order (most to least favourable) is key.

7: Stay away from the touchline! (Ross…)

8: Look after those re-rolls…

So, there we have it! As I said earlier, you can expect more posts to follow over the week, with the focus very much shifting back to The Chapel. I will also have a short story for you, for those that like such things. Hopefully it will give you a glimpse of my vision for the Albino Forest, and some of the macabre practices that happen in its depths…

7 thoughts on “The Clockwork Orange take to the field!”