Wow… what a weekend… 3 full days of hobby, with at least 30 hours of gaming & socialising – man, I was absolutely exhausted by the end of the weekend! I got to see hundreds of the loveliest miniatures you will ever see, including some rare beauties from the White Dwarfs of my youth, and some of the coolest OldHammer examples from the interweb, but the best bit was getting to meet virtual friends for the first time, re-meeting folks from last year, and getting to know new people for the very first time – including some very notable names from the misty dawn of our hobby. I played WFB 4th ed for the first time, played Mordheim for the first time, did some jousting, raced a jetbike, played Necromunda, and took part in a big multiplayer game of Rogue Trader. I even squeezed in a little game of AoS on the Sunday evening!! So many cool things… here is the complete run-down, (warning -MANY photos!):

Thursday: Picked up Tytus from Luton airport & headed up to Newark. Stopped at Warhammer World on the way for a quick whistle around the exhibition hall. Out for a burger in Newark & crashed a Steampunk cosplay party before getting an early night.

Tytus & me, ready to rock

Spent some time looking at the fantastic ‘mega-boards’ in the main marquee, including the superb Helsreach board, (Curtis & Aiden), and the equally stunning Heldenhofen board, (Geoff, Harry & Chris). Each board was so big that several different games could & did take place simultaneously over the weekend – basically giant gaming sand-boxes. Heldenhofen hosted multiple games of Mordheim, BeirBowl, Squig Hopper racing and Giant Slaying, while Helsreach hosted Grox Hearding, Jetbike races, Necromunda and Rogue Trader… that’s just the games I know about, but I’m sure that more went on! Just take a look at these beauties: 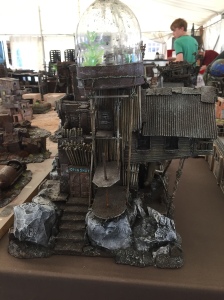 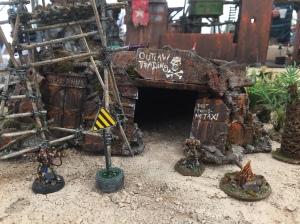 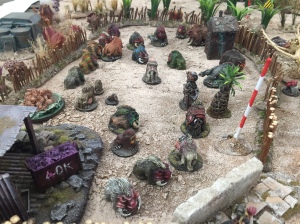 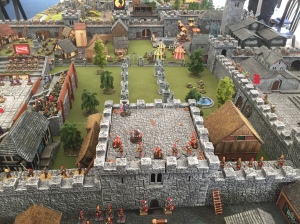 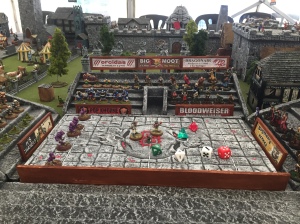 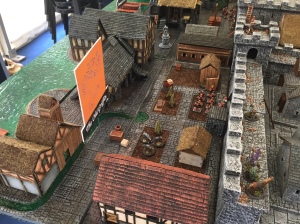 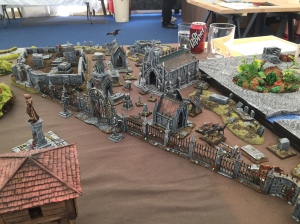 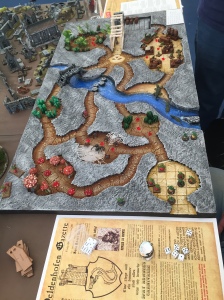 I also made sure I had a catch up with the two Tonys – Mr. Yates and Mr. Ackland. I am a particular fan of Tony A’s work – he’s an absolute legend who has contributed so much of the art in RT, WFB, WFRP and RoC. I deeply regretted not making Tony an offer on some of his work last year, so I summoned up the courage to ask if he would consider selling anything this time around, and was lucky enough to get some of the original pieces from the RT bestiary. I am absolutely delighted about this because this is the section of the book that I spent the most time looking at as a kid: 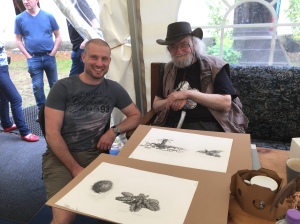 A quick tour of the display cases revealed these treasures from a bygone age:

Then I was lucky enough to be invited to play in a FB/Mordheim campaign to recover the recipe for warpstone infused cheese! The game was created between Davide & Gionathan (from Italy), Tytus (Poland), and Richard from the UK, so I was really just along for the ride. The campaign started with a jousting competition, which my Undead attended while disguised as noble knights (i.e. I don’t have any cavalry & had to borrow some!). Appropriately enough, Gionathan’s gorgeous Bretonian knights took the most honours in the jousting, which brought some benefits to the next game – a 5-way game of WFB 4th edition. Gionathan took one corner of the board with the flower of Bretonian chivalry, while Tytus took another with some good old Empire steel. My undead took up another corner, while Richard’s Sea Elves made a late appearance on the fourth. Davide held the village in the centre with a motley collection of halflings & dwarfs, where each unit of was hoarding some warpstone tainted cheese. The idea was to compete to destroy units & loot them for cheeses. There was also a wizard hidden in the woodlands, (busily messing with the weather), and one half of the recipe for the evil cheese was in the grasp of a hidden halfling cookmaster. There were so many funny moments – the illegal rampage of my zombie dragon, (should’ve run away in the second turn, but we didn’t realise until the fifth or sixth – during which time he devoured a unit of halflings, killed the Empire general & gryphon, ran the Sea Elf sorcerer off the battle field and killed the grey wizard!), the amazing teleporting grey wizard (who stole ALL the cheese before being blasted by the illegal zombie dragon), the cowardly Bretonian general (who ran away, ran back, and then got himself killed in a challenge against a Lich), and the crazy nautical beasts and their handlers on the sea elf side (crabs, lobsters, jellyfish & seahorses instead of dogs!). We ended the game with the Empire clear winners, having used the magic deck to great effect to recover the bulk of the cheese and half of the recipe! Here are some pics:

Round bases on movement trays!!! Heresy!!! 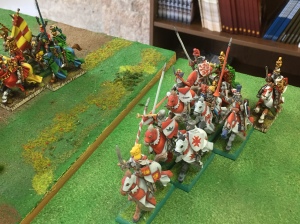 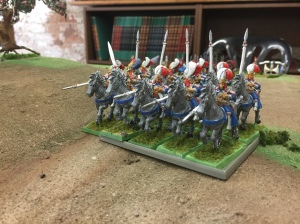 We continued the campaign over from Friday, this time playing Mordheim on the incredible Heldenhofen board. We were busy searching for Marion Thistlefoot and the other half of the cheesy recipe, and this time Davide joined the search with his Tillian warband. I had one skeleton interrupt a Halfling Hotpot party (?!) & end up frenzied for the rest of the game, while another skelly got murdered during another search. On the plus side, I gained a halfling rat catcher along the way, so that was cool :-)  The recipe turned up after a few turns, so a bloodbath ensued as we all got stuck in to try and retrieve it. Even the city watch got involved in the mayhem (with the legend that is Garth taking the role of lawman very seriously indeed!). In the end, the undead prevailed, with the high wound count of my general Richter Kreugar, and Gregor the undead ogre keeping them in the game to the bitter end, (though they were both were down to 1 wound each!) Again, many funny moments, with the Bretonians running away lots again, and the Tillians & Empire troops drawing the ire of the city watch on several occasions. Here are a couple of shots, (though I didn’t take as many as I should’ve done):

And here are the fearless generals – me, Tytus, Davide, Richard & Gionathan

Superb gamers one and all

After Morheim, I quickly headed over to Helsreach for a spot of jetbike racing – much hilarity ensued as we crashed & bashed our way around a brutal figure of eight course. My bike failed to cross the finish line after gracefully testing the surface tension of concrete :-) 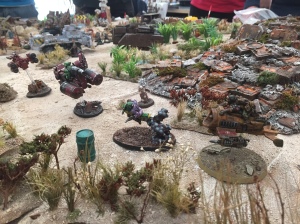 I then joined in with a bit of Necromunda but failed to get any good pics. I think the tiredness had really kicked in by this point, and my brain wasn’t really working very well.

Sunday was a bit of a wind-down day, and I was lucky enough to enjoy a nice casual game of RT with some OldHammer blogging heroes – Jon, JB, Colin, Aiden and Shane, along with Chris & Tom (who probably also have blogs, but I don’t have the deets). The game was roughly ‘goodies’ vs ‘baddies’, with me & Aiden taking Guard, Jon with a squad of Arbites and Chris with a squad of Eldar, while Shane brought Orks, and the others had various pirates, scum and outlaws. This was a distinctly multinational affair as well, with JB (France), Shane (Australia via Thailand), and Chris & Tom (USA). I was lucky enough to face off opposite the Orks, and so had the honour of playing against two of my favourite things on the internet – Shane’s amazing slaver walker, and his superb version of Governor Kulo from the Book of the Astronomican scenario ‘Wolftime’. Getting one of my tanks and a bunch of troops stomped on by the walker was brilliant, and I was almost sad when a crafty Eldar blew it up with a well-placed lascannon shot from the other end of the table, (after many turns of me & Aiden both trying and failing to kill it!). Governor Kulo managed to escape the wreckage, only to be gunned down by a lucky survivor from the earlier stompy rampage. My corner of the table was eventually secured, albeit at great cost, and Aiden and I had just enough firepower remaining between us to contain the pirate scum that were in danger of sweeping the board. Luckily, they didn’t have too much in the way of anti-tank, because I had precious little left in the way of troops!. This loose and easy game had many funny moments, including the ‘baddies’ shooting down a flyer – only for it to crash in their midst & kill 15 or so scum-bags, using Shane’s walker with Giant rules from WFB and going on a stompy rampage, and Aiden doing some ‘on the job’ training on Conversion Beamers – killing one of his own men, and shooting me in the process :-) 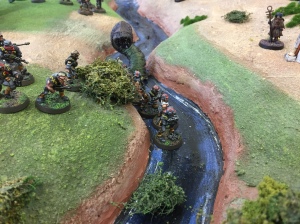 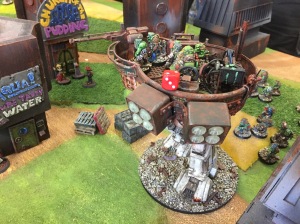 Just look at that walker… 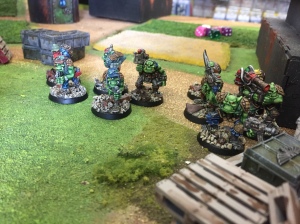 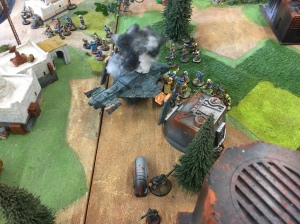 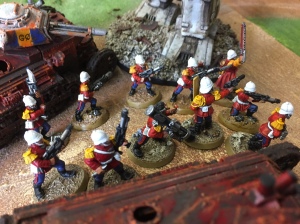 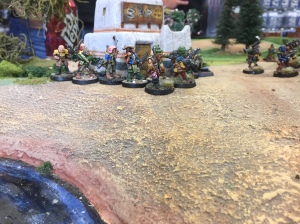 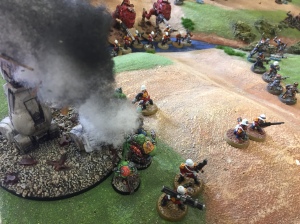 I also got to meet a certain Rick Priestly, the named author of Rogue Trader, and all-round gaming legend. I shamelessly got my copy of RT signed and blagged a photograph, while having a quick chat about how funny it is that vehicle rules seem to have come full circle in 8th ed, (working in basically the same way as they did in RT). There was also an interesting insight regarding the bestiary section of Rogue Trader, with Rick explaining how this was based on existing D&D creatures, and was basically included to boost sales said minis. Apparently, it was way more successful than anticipated, with RT sales outstripping D&D sales at that time. I would have loved to have chatted longer, but we were mid-game by this point and I didn’t want to hold up the table with my fan-boy shenanigans :-) 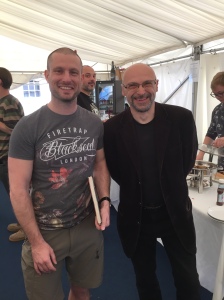 I also got to meet Nigel Stillman very briefly, and said hi to Kev Adams during his now customary face sculpting stint. Here is Nigel, showing off what I assume to be a strategy hat of some sort:

All to soon it was time for an hour of goodbyes, and promises of next year. A huge thank you goes out to the Ansell clan for their superb hospitality and generosity, to the visiting dignitaries and hobby legends who so willingly give their time and energy, and to all the amazing people that were involved in running the event, creating the amazing mega-boards, and in devising and running various games. BOYL really is the highlight of the hobby year as far as I am concerned, and it is all thanks to the amazing people involved: 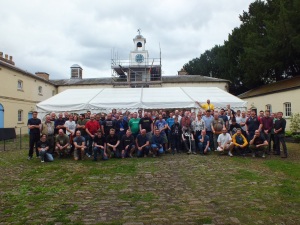 Tytus crashed at my place on Sunday night, and we squeezed in a quick game of AoS… The Empire troops were unfamiliar with this new fighting style and were defeated in the field, but not before a plucky handgunner managed to take down none other than Richter Kreugar with a cheeky dagger blow… As the battle subsided, the heavily injured handgunner noticed a scroll in among the pile of bones that was Richter, and, without understanding why, he stole it before begining the long, painful crawl back to his own lines and safety…

Later, Richter was brought back to shuddering unlife, as per the curse that was placed on him so many centuries ago. He screamed his rage to the stars as he realised that his half of the warpstone cheese recipe had been stolen. With both halves in the hands of the Empire, the fate of whole worlds stood in the balance…