Greetings all, I’m very happy to be able to show off my second mini for ‘February’, but before I do that, I have a little terrain distraction to share with you… I picked up the ‘Legions of Nagash’ book for AoS last weekend – it is a great book, and gives the forces of death much more nuance and flexibility. There are a number of changes to how the armies of Nagash operate, but one of the major differences is how summoning works. Very briefly, you now get to set up four graveyards from which your summonable units can spawn – obviously, the Gardens of Morr kit is the go-to choice for the discerning modeler, so I got mine down from the loft of holding, and got the four main bits built & painted:

It is worth mentioning that the new ruling calls for a nominated ‘point’ on the battle field, so using a fairly big piece of scenery would be cheaty… the first two pieces have an obvious single point, but the second pair don’t, so I painted a gold ornament on one end of these two. I’m pretty pleased with how they came out, and they really are lovely kits that don’t take long at all – especially if you leave out the fence!

Here’s a nice atmospheric shot of Gorgo Romero raising a zombie horde, (with thanks to my wife for vaping hard to add the special effects ;-) )

Moving on to ‘Fembruary’, I just want to say how delighted I am with the support for this – I have been admiring and commenting on the many excellent contributions that have been popping up among my fellow bloggers and beyond – good on you all for getting involved, representing, and spreading the word. I’ll have to curate a round-up of images and do an end-of-month recap – a task I look forward to immensely.

Anyway, time to introduce my second effort – I have named her after the awesome Vasquez, (played by Jenette Goldstein), of Aliens fame. I know the mini doesn’t look particularly like the movie character, but hey, she’s never been mistaken for a man either, and the gun seals the deal for me :-) 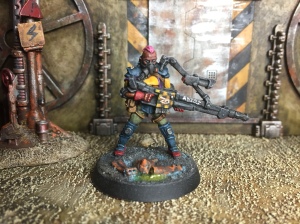 And here she is with Siouxsie: 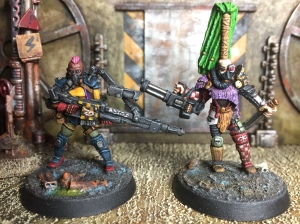 I had great fun painting Vas – she’s a cracking mini, and it was great to mix it up a bit with the skin tone. I think the purple/yellow/red flashes work nicely with the more utilitarian bits of uniform, but the star of the show has to be the pink dreads… They just look so damn cool! I have three more of these Ghosts of Gia in various stages of being painted – I optimistically thought I might get 10 done, but no way that is happening, so I’m going to crack on with getting five of them painted before the month is out. I also have a long-neglected character to paint as part of Azazel’s latest challenge, so plenty to keep the brush busy over the next ten days! Until next time folks :-)