Greetings Terrans, wow, what a week! I had all the fun & mayhem of BOYL last weekend, so three days of solid oldhammer gaming, shooting the breeze with friends, checking out amazing minis & gorgeous terrain, and generally soaking it all in. As always, the Ansell clan were hosts beyond peer, and all those who make the event possible were superb. Also as always, I have a photo dump for you to pick through, so here we go!

Friday: First up, a great game of Rogue Trader (i.e. Warhammer 40k first edition) with my pal Titus (of gameoftravel fame). He pitted his newly painted and stunning Imperial Fists against my also newly painted & very bright Eru-Kin. I used Slaan rules from Rogue Trade, and loaded up on high tech kit, while Titus used a contemporary Space Marine army list. We set out some objectives, and also included some RT psychic powers on both sides. It was a cracking game, with the Marines taking a brutal toll on the Slaan, but the Slaan being more focused on their objectives. Highlights were the Slaan hopping all over the place thanks to their displacer fields, and the pivotal moment where my Slaan mage changed the allegiance of the Marine Dreadnought. Awesome game: 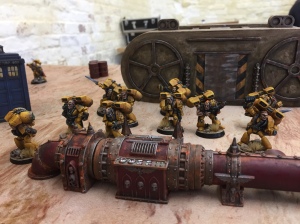 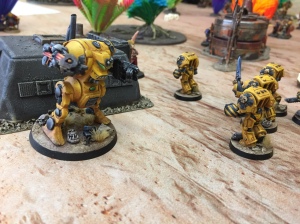 Next up I got involved with a classic WFB campaign, and played Terror of the Lichmaster. Wojceich (Frugelhofennews) had been working on collecting and painting all the correct buildings and minis for the campaign, (including some very rare and collectable pieces), but had only recently discovered the UK Oldhammer scene, so made the BOYL event at very short notice. It was a genuine pleasure to see how much he enjoyed his minis used in the campaign, and hopefully we’ll see Wojceich again next year for Revenge of the Lichmaster! 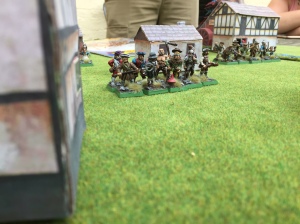 Saturday: I spent most of the morning hanging out with the WIPster posse – Axiom, Cheetor, Asslessman, Whisky Priest, AntiPixi and Airbornegrove, plus event-guru Garth and a few folks I am less familiar with. Collin (Whisky Priest) ran a game of ‘What a Tanker’ – kind of World of Tanks for the tabletop. It’s a neat game, and great fun to play – even with the chaos of managing 11 players! It was really good of the guys to fit me in at the last minute, even though it made for an odd number of players and skewed the game… they really are an awesome gang of Orky tankers 😊 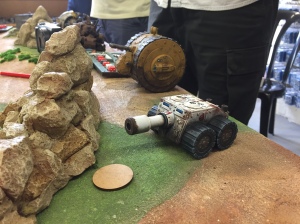 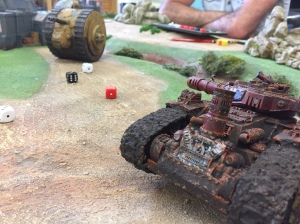 The afternoon had the Space Bastards game happening on the Helsreach board, expertly handled by Curtis. The basic idea is a small unit of Marines (or a single Marine plus human henchies) warp in to Helsreach, and kick up as much mayhem as they can. Points were available for killing, graffitiing, boozing, and one or two less salubrious activities. The whole idea came off the back of a conversation last year about how awesome Marines used to be when the fluff had them as genetically engineered homicidal maniacs, and how well this would work when said Marines were on shore leave…  Even the goody-goody Ultra Marines were sociopathic bastards back in the day  ;-)

Here is my Bastard (finished the night before I left), and his henchmen, :

During the game, I ended up having my spree interrupted by Hambry and his gang of Helsreachers, so a right good ding-dong took place between my mob and his. By the time the game finished, I had almost wiped the impudent locals out, and had a hefty kill tally to show for it, (plus some graffiti here and there). And here they are in action: 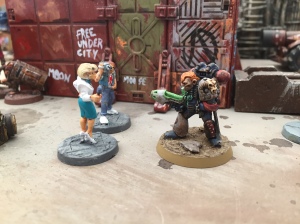 Late afternoon I was lucky to be included in another WIPster game – this time Jon (Axiom) was running a bounty hunting skirmish, which was fast paced and very funny. Jon had thoughtfully created stats for a huge number of eclectic minis from his collection, and it was awesome to see them assembled in one place for a game. I ended the game with a pleasing number of credits:

I also managed to jump on another bandwagon on Saturday evening, and took part in a classic Rogue Trader scenario – the battle of Jadeberry Hill. It is designed as a follow-on to the famous Battle at the Farm scenario from Rogue Trader, and pits Crimson Fists against Orks. Aiden had provided the board and the Orks, while Drew provided some gorgeous Crimson Fists. I joined a few turns in, and helped Jesper with the defence effort. We managed to hold out long enough to get the escape signal, enter the tunnel and reset the demo charges before the swarm of Orks overran our position. Several heroic Marines sacrificed themselves in this effort – a flamer guy who held up the Ork advance to allow his brothers time to escape, and a single trooper who intercepted a pair of sneaky greenskins on the verge of slipping through the net, heroically killing both in melee before getting shot to pieces. 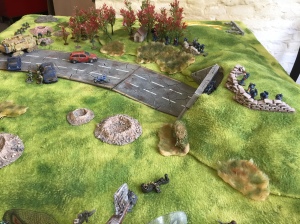 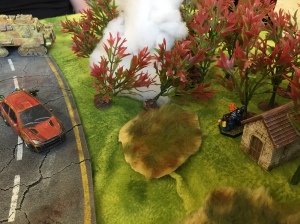 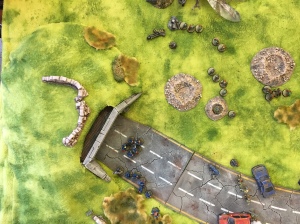 Sunday morning was a very groovy affair – I had the pleasure of setting up and GMing an impromptu game of Rogue Trader, with Jesper controlling my Praetorians, David running the Eru-Kin, Nibbel with his Scavvies, and Hambry with his Inquisitor and retinue. Titus also joined the party late with his Imperial Fists. I set up a small settlement and civilian population, and gave each general a set of goals – most of which clashed with at least one other player. It was my first time running a game this big, and it was certainly a challenge, but I really enjoyed the experience, and I think my players did as well. Trouble is, I was so busy, I forgot to take many photos! It ended closely, with a number of objectives achieved by most players. David nicked it in the end, with his surgical precision, strategic acumen, and cold-blooded xenos focus on his objectives. 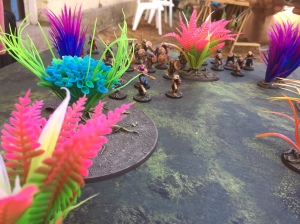 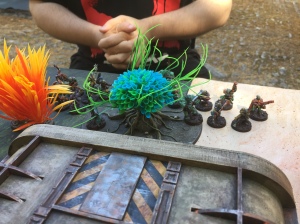 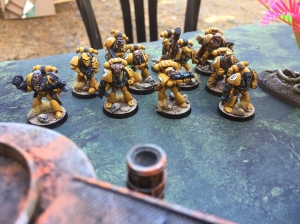 And that was it for another year! Man, I had such a good time, and can’t wait for 2019. A bunch of us are already planning and scheming, with some great ideas bubbling away… I’m thinking of trying to run Wolftime, and I even hear whispers of a Slaves to Darkness warband challenge! Awesome :-)