Greetings Terrans, how goes it? It feels like an age since I last put finger to key for this blog, but really it has only been a couple of weeks! I must admit, I haven’t been doing hobby stuff as frantically as I was beforehand. I was really fired up after completing Kulo, but then I learned that the admins on the OldHammer FB group had taken down my post on him – either because of the Trump thing upsetting someone on that forum & prompting a complaint, (bad), or in a pre-emptive complaint avoidance strategy, (worse). I felt a bit deflated by this if I’m honest – I understand the need to avoid causing offence, and I hate the thought of upsetting someone for no good reason, but I also think it’s a very sad day when we can’t poke fun at politicians & are actively censored to achieve that aim… I found myself caught between being embarrassed & worried on the one hand, and indignant on the other, and I lost the wave of encouragement that I had felt for the project up until that point.  Still, it is what it is, and while it took the wind out of my sails a for a good few days, I can’t feel pissed off about it without acknowledging that the post may have pissed someone off. Long story short, I pulled my finger out & made a start on the Space Wolf side of the Wolf Time campaign… Grab a coffee & pull up a chair – there is quite a lot to discuss :-)

Firstly, I want to take some time to articulate what I’m trying to achieve with my Space Wolves – running a period campaign isn’t just a case of slapping some paint on a bunch of minis you know! ;-) My Marines needed to be contemporary to the Wolf Time campaign, way back before GW started to crystallise the Space Wolves into fur-clad, ice-gun toting Werewolf-Vikings in space. This needed some research!

The only valid colour reference material for this time is to be found in the core Rogue Trader book, and in the Book of the Astronomican itself: 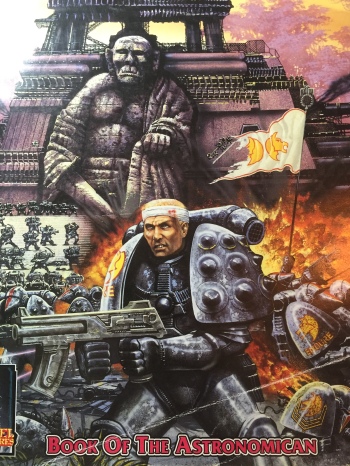 First thing to note – Space Wolves of this era are GREY. Not bluey-grey, nor greyish-blue… just grey. The RT image uses a lighter shade than the BotA cover, but that’s fine – Marines were allowed to field modify their armour colours back in the good old days, (even using camo if they felt like it!). Second thing to note is the use of yellow as the spot colour – even (it seems) contradicting the RT claim that troopers get a red stripe on their lids. Third thing to note – no fur, runes, ice weapons, or any of the other stuff that makes the Space Wolves what they are today. They are just plain old Marines that are clad in grey and yellow & just happen to be called Space Wolves! However, we also have some character sketches in the BotA, and these show the very beginnings of the evolution of the chapter into what we know today… Note the canine teeth:

So far, so interesting, and at this point, I felt I had a good idea of how my Marines were going to look. Next, I read and re-read the verbiage relating to the Marines in the Wolf Time campaign:

“Five years ago, Commander Enoch, with nine of the ten warrior companies that comprised the Spacewlves, had joyously begun the chapter’s five hundred and nineteenth crusade. There were few warrior-brethren left now. The crusade was almost at an end. Soon they would return to their own world of Lucan and the formidable fortress-monastery that was their ancient home. Xit would be their final challenge – the last campaign of a five year mission to cleanse the recently discovered worlds of alien occupation.

The years had taken their toll on the chapter’s resources – both human and otherwise. The Restitution’s sister ship, the Vengeance, had been lost in the fighting around Tulwa. Her brave crew and half the fighting contingent died in the burning hulk. Most of the transport still lay immobile and rusting in the swamps of Jytor. It was doubtful if the Restitution was in any condition to fight, twenty seven percent of her hold capacity and thirty four percent of habitable areas were sealed pending major repairs. Over a hundred men had been trapped in the damaged sections when the threat of depressurisation forced the decision to seal. The Imperial edict that began the crusade was an inestimable honour, but its completion would allow much-needed time to rebuild the weary and depleted Spacewolves.”

Later in the Marine’s campaign orders, the book states the following:

“The troops at your disposal comprise the remaining warriors of the Spacewolves chapter of Space Marines. Much of your equipment has been expended during the crusade, and many of your brethren have fallen in battle.”

So, two things to note – firstly, the campaign refers to them as Spacewolves, not Space Wolves (as in RT). Interesting, but not too relevant from a modelling perspective. Secondly, these guys have had a proper kicking during their crusade – indeed, these troops are among the very last of their chapter! In practical terms, I felt this gave me license to be quite eclectic with my mini choice, using odd armour variants, and including specialists like medics and techmarines as regular troops, (there were no rules for these specialists at the time). Also, I figured that I could get away with quite a banged up & weathered paint job – not as grungy as the Orks of course, but not the pristine battle-plate that most people go for either.

Finally I had some self-imposed ‘rules’ that I wanted to follow for this part of the project… Firstly, no plastic minis – lead or dead baby! Secondly, full WYSIWYG, except for a few special exceptions that I’ll comment on later. Thirdly, I wanted to have squad markings that allow for easy in-game identification.

Now that I had my inspiration, vibe and rules nailed down, I got started on the six ‘Combat Units’, (referred to as ‘Howlers’ in the book, but essentially Tac squads). Each combat unit has a Sgt. With Bolter & bolt pistol, three troops with bolter and bolt pistol, and one Marine with a missile launcher and bolt pistol. I wasn’t quite ready to tackle the missile launcher Marines at this stage, (quite a lot of conversion work needed), but I did get cracking on the troops for four of the Tac squads. I also didn’t have anywhere near enough proper backpacks for my Marines, so I went third party & sourced some suitable ones from Spellcrow. I used different colours on the backpack vents to identify the squads – one vent is yellow for Tac squads, and the other shows the squad colour. First up, Red squad: 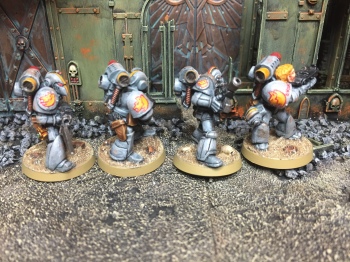 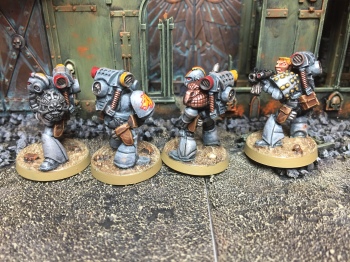 Next we have Blue squad – note the autogun, medic & chaplain sergeant. Again, the autogun will be played as a bolter because ‘cool’, and bolt pistols are sculpted on where needed. 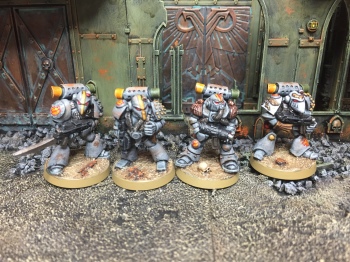 So that’s it for now! Hopefully this gives you all a clear idea of what I am trying to do & why. I have the rest of the Tac squads almost ready to undercoat, and I’m about to start working on prepping the support & assault units as well. I do need some help from you guys though – one of the cool things about RT Marines is that they liked to add graffiti to their armour, like this guy:

I’m drawing a blank on other pithy one-worders to embellish my Marines with, but if you post a comment below with some suggestions for graffiti, I’ll include them on a suitable mini ;-)