Greetings Terrans, how goes it? I hope you are all safe and well, and are adjusting to this new weird reality we find ourselves in! This isolation business really does suck a bag of dicks, but every cloud has a silver lining, and hobby time is a great way to keep things on an even keel. I have some big plans, but more on that later – first, I want to share my completed DoK Warband.

The first new addition is a fourth Handmaiden for Seros – because points, it makes sense to have four Witchelves in the warband, so I used a few spares to make this bloodthirsty lass: 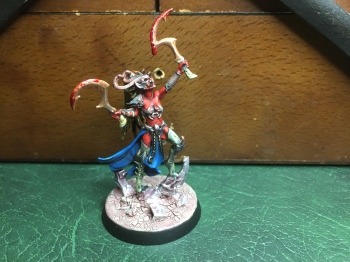 She is based on the Hag Queen from the Cauldron of Blood and was kindly donated by Thomas of High Times on the Eastern Fringe (thanks dude!). I finished her with some of the spare sickle arms from the flappy Harpy types. Here she is with her pals: 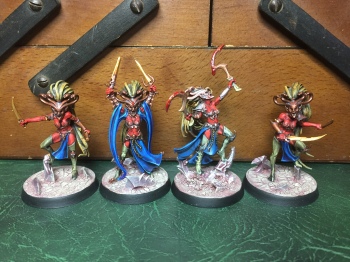 Next I have three choppy Harpies, (I refuse to use the bollox GW name for these winged ladies). Lovely minis but very fiddly and flimsy… They just had some minor headswap work, and changing up the basing elements. 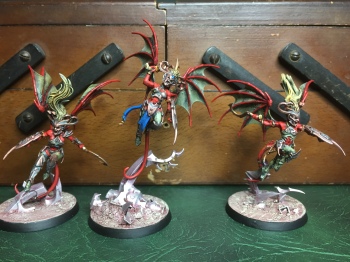 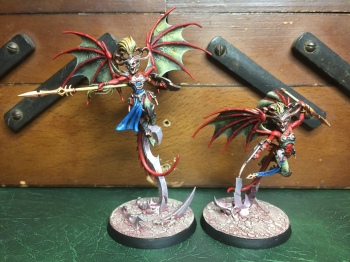 Finally, I couldn’t resist putting the Medusa from the Cauldron of Blood set together. She had a headswap, and all the OTT bleeding got shaved down, but she is otherwise unmodified. I don’t have a specific role in mind for her at the moment, but I think you can recruit monsters to your Warcry warband, so she might find some use as a counts-as one day: 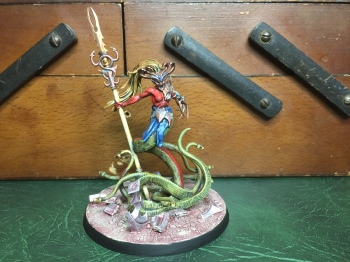 I think that will be all for this little project for the time being – here’s a final shot of the whole group together: 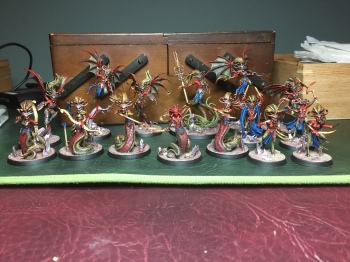 Now, let’s talk a bit about stuff coming up. I was planning to do a DreadMob to support my RT Orks – very much with BOYL in mind, but the way things are, there is no guarantee that BOYL will be going ahead this year. I still do intend to do some Dreads, but not as urgently perhaps. I also have all of the Iron Claw Space Pirates collected and begging to be painted up – again, not so urgent now perhaps.

Somewhat surprisingly, I actually have the urge to clear some of the plastic crap that I have been accumulating as a result of subscribing to Warhammer Conquest… I’ve given my mate Ross all the Nurgle stuff, but I have a ton of Primaris to deal with, so I’m setting myself a little challenge – how can I do a Primaris army, and still make it old school. Ideally, this should push my painting on a bit, and get me to the point where I give at least some fucks about new 40k… Wish me luck!!