Hello chaps, hope you are all well! Some hobby updates for you – a sort-of battle report, a tiny painting update, and a glimmer of hope for the ridiculous Taurox…

First up, I had a 1000pt game on Monday evening against my nemesis Ross and his STORMbringers Daemonic army. We played Maelstrom, and were both trying out new things, so it made for a really interesting encounter! Appologies in advance, there are no photos of the battle – too many WIPs on the table, and me and Ross are funny about that sort of thing J

So, Ross came with two Soulgrinders and a pair of Tzeentch Heralds (I think) on disks hidden in a squad of (ahem) Screamers, plus multiple units of Horrors. I took a slightly different approach to my usual, and went with 2x Vets plus CCS in Chimeras, and a Scion CS plus 3x 5 man squads. It felt weird not having a hoard of troops on the table, but I fancied doing something a little different. It was all a bit cagey at first, as we moved our forces to grab objectives, and a few more units of Daemons were summoned… I missed the chance to take a strong early lead with a lousy D3 roll for holding three objectives.

We really got into it on turn two – Ross had to come to terms with the sheer size of Soulgrinders and the implications when moving through cover, and I realised just how flaky Deepstrike can be! I had 3 squads arrive from reserves – two suffered a mishap, (one going straight to ongoing reserves, and another getting dropped in a corner far far away…). The one unit that did land managed to strip a hull point off a Soulgrinder, but then got charged by it and lost two squad members. My plasma vets & CCS disembarked and gave a unit of Horrors the good news, scoring me first blood, and a summoned unit of Daemonettes on the opposite flank ripped a Chimera to shreds, forcing the vets to disembark… There were a few tactical objectives scored each way, and things were pretty even in terms of points.

The third turn got really interesting – I drew a tactical objective that gave me D3 points if I could get 3 units into the enemy deployment zone. I drove my two remaining Chimeras into the zone at full throttle, and tried to deepstrike my 2 remaining Scions in for good measure… The melta Scion squad scattered outside the deployment zone, but were within close range of a Soulgrinder (which they duly put it out of action). The Scion command squad didn’t arrive… (again). That just left me with the remnants of the Scion squad that was stuck in cc with the other Soulgrinder – my only hope to get the D3 points. At this point I had the choice to either risk another round of combat or declare ‘our weapons are useless’ and try to disengage… I tried the latter and lost the roll off, killing the squad and freeing up the Soulgrinder, who went on to rip a Chimera to pieces as well… epic fail :-/

Ross also got his Screaming Deathstar into the fight against my plasma vets – I say Deathstar because dem Screamers was buffed up to a 2++ save… I threw the kitchen sink at them in my turn, and managed just 2 wounds, (amusingly losing both my plasma scions to ‘gets hot’). In return, they wiped out 8 vets with flickering fire from one of the Heralds, and another 2 from the CCS with slash attacks… luckily, my chaps remained steady, and held on to a scoring objective.

(Un)fortunately, time was up on the game… I had finished ahead by one victory point, but really it was a pyrrhic victory as I certainly wouldn’t have lasted another. I learned a few things along the way though, particularly the risks of having 40% of your points tied up in reserves… in fact, 12% of my points didn’t turn up at all! Ross, on the other hand, probably ended up with more points on the table than he started with, thanks to summoning.

I think that I will certainly have to look at my use of Scions for next time, plus I really didn’t have anything that could deal with 2++ Screamers, (though I do have a cunning plan to deal with his screaming deathstar next time…). All in all, a great game with a great opponent, and I am looking forward to the rematch already J

In other news, it has been quiet on the painting front – I have a top secret side project on the bench at the moment that has bumped everything else, but I did find time to weather the cloak on my Tempestor Prime, (on the advice of some club-mates). Shame the doofus didn’t make it into battle on Monday! 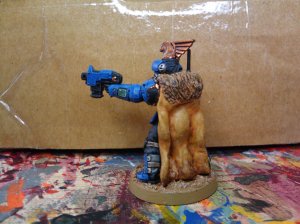 Finally, the awesome Victoria Miniatures has posted about a whole new bunch of resin that they are gearing up to release… I am sure I can see some big wheels in that pile – hopefully it is a conversion kit to make the Taurox a beautiful wheeled swan rather than the fugly duckling that GeeDub came up with… fingers crossed on that score!! 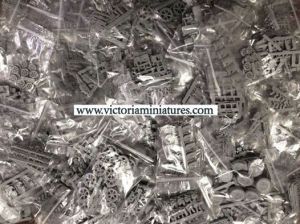 1 thought on “Battle report, painting and (hopefully) good news for the Taurox?”