Happy Monday folks, I’ve had a really poor week hobby-wise, with hardly any time for painting at all! But… I did manage to finish this guy, and I am rather pleased with the result:

He’s based on the old Titan Princeps Seniores, (thank you Ross!), tricked out with Skiitari/Sicarian arms and appendages. I intended for him to form part of the growing ‘Agentia Scrutator’ salvage team on my work bench, but I also wanted him to stand out a bit, either as a character or even as a lone agent. I just reversed the colour scheme to achieve this – a simple trick that seems to have worked. Here he is with the other tech ganger for comparison, (a good excuse for a slightly better photo of the first guy):

I also got slightly side tracked with the freebee AoS mini that came on the cover of last week’s White Dwarf… I got a bit obsessed with stuffing the body cavity with rods and cogs, but after a lot of huffing and puffing I ended up with this – the Tick-Tock man: 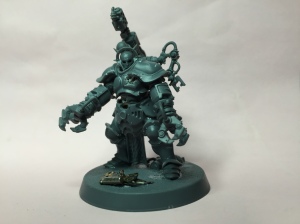 I have some ideas for this dude – I imagine that he is a creepy automaton that dwells deep in the sumps, some technological relic of a past age. Rarely seen by anyone who lives to tell the tale, he has become a mythical bogyman used to frighten children… but, (of course), the tales are true and the Tick-tock man is real, toiling away in the depths – but to what end?

Don’t get caught by the Tick-Tock man…”

Happy Monday folks, I’ve had a productive weekend on the hobby front and I wanted to share something a bit random with you, plus a cheeky WIP for my next little project (it’s a bit of a photo bomb today).

First up, we have an uncatalogued ”87 (I think) Jabberwock by Bob Olley, and what a beauty she is! I picked her up for a reasonable sum a few weeks ago, and she needed a good amount of clean-up work and restoration before painting – she had nasty claggy glue all over the place! Once cleaned, assembled and filled, I decided to try a very different painting approach with this old girl. She got a white undercoat and then I painted her with ink washes only, (though I did use ‘normal’ paint for the base, claws and the pupils of her eyes). I deliberately went for a naturalistic pallet of greens, browns and yellows, and I’m really pleased with the result. The plan is to use her as a GM controlled sump creature, Deathworld monster, or some other npc nasty: 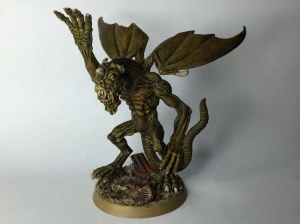 END_OF_DOCUMENT_TOKEN_TO_BE_REPLACED

Happy Wednesday folks, I’m pleased to introduce Sten, the Man of Stone, (so called for his stoic demeanour and utter lack of pity or remorse). He’s the Wolfguard Sergeant from Stormclaw – the latest addition to my growing pack of brothers of the Crimson Howl. I still have some finishing touches to apply, but he’s ready enough to share:

And here’s the fluff:

Sten is kin-brother to Mördaren, yet couldn’t be more different. Sten, called the ‘Man of Stone’ by his pack, is utterly without passion, pity or remorse. Where Mördaren is an incarnation of fiery rage, Sten is cold, controlled, calculating and relentless… His twin-hearts could be made of pure Fenrisian ice, but this stoic demeanour masks a secret, for Sten fights a constant battle against his own rage and blood-fury. His desire to see worlds burn and to cleave mountains of skulls is getting stronger – the whispers in his mind become ever more insistent and demanding. His self-control is absolute for now, but ultimately, Sten knows that this is a battle he cannot win. He sees his own future in the twisted form and insanity of Mördaren, and Sten fears this fate above all else… and yet, with a growing sense of inevitability, he also craves the release of losing himself in the howling madness that awaits…