Hello chaps, I thought I’d put a quick post out – I had my first game of Dystopian Legions last night, and really enjoyed! For those that don’t know, Dystopian Legions is a steampunk skirmish game, set in an alternate timeline around the 1870’s. It’s 32mm truescale, and has some lovely models. We have the major empires of the time represented, and it looks like each is nuanced to favour a particular style of play. My pal Matt was good enough to lend me half of his Kingdom of Britannia force, and we had a good scrap with the aim of testing the rules and having a laugh. I should point out that Matt only has one or two games under his belt, so we were referring to the rules a lot :-)

The first thing that stands out is the per unit activation, so it needs more thought than 40k. Second thing is the really cool dice mechanic… 4’s and above are (usually) successes, and you use different coloured dice (depending on what you are firing, range, etc.), while 6’s usually apply bonuses. This is quite cool, and can produce some outrageous shooting with a bit of luck, especially on the red dice! Another thing that I noticed was that you need to be a bit more thoughtful about facings, fire lines, etc. It’s a bit more to think about when compared to 40k, but is handled nicely in game. It flowed well, and would be even better with a bit of practice. There is a nice ‘orders’ mechanic for buffs & debuffs at play as well – I got the feeling that mastering this would go a long way to getting good at the game… the term ‘easy to learn, difficult to master’ springs to mind. Oh, and tanks are crazy-powerful in DL, (as well as looking f***ing awesome).

I especially liked the way that the lists build – it seems much more sensible than 40k, and looks like it would produce a nicely balanced game each time… I don’t think it is open to spam or power builds in the same way as 40k, and that is probably for the best.

Anyhow, we threw some dice, had a good laugh, and this is definitely a game that I will be looking at getting into – I quite like the look of the Empire of the Blazing Sun… Anyhow, here are some pics – you can see what I mean about the awesomeness of the models (beautifully painted by Matt)! 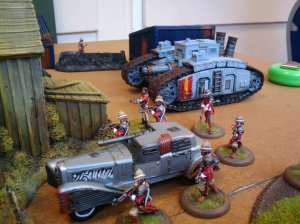 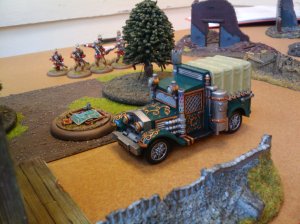 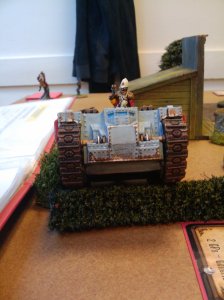 Also, while I’m here, I thought I’d put up a sneaky WIP of the next BadWolf… he’s definitely a wrong’un!