Happy Wednesday folks, sorry it has been a while since I last posted – it has been a hectic couple of weeks! The big news is that I finally finished my Rogue Trader conversion, so yey! He’s based on the LE10 Power Armoured Trooper, and was one of the most complicated and detailed conversions I have attempted… more on that here & here.  From a painting perspective, I was really inspired by the Inquisitor pictured in the Book of the Astronomican, and I tried to capture some of that vibe. My chap got white undercoat, and then the bulk of his power armour was coloured with yellow and brown inks, before I went to town on the freehand… I was right at my painting limits at this point! Then it was time to pick out the ridiculous amount pipes, cables, equipment and souvenirs that are festooned around his armour. The helmet face plate was glossed black, and after a few iterations I settled on a flaming red for his crest. A final round of tweaking and weathering was applied to bring him to this point: 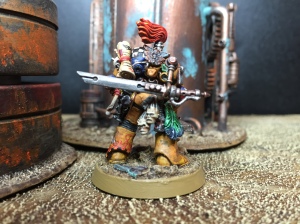 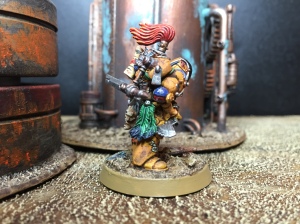 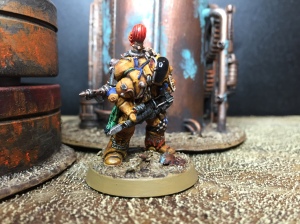 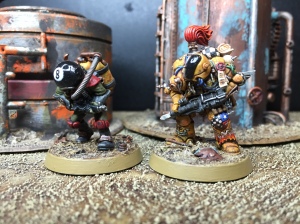 And here’s the fluff:

At 42 years old, (standard Terran), Arturo Lamina is relatively callow for a Rogue Trader. He grew up on Feston III, a second cousin within the privileged Familia di Lamina – the hereditary ruling family within the sector. Traditionally, members of the Familia work their way through numerous positions within the administrative and military hierarchies of the sector, developing their political, martial and leadership skills as they progress… Arturo showed little inclination for such a life.

Wayward and rebellious as a youth, he was seconded into many roles within the administration, but his wilful disregard for tradition and propriety led to several embarrassing incidents. Eventually, he was posted as an officer within the PDF in the hope that this would ‘straighten him out’, but this plan backfired. Instead, Arturo used his rank and system-wide access to facilitate a profitable archeotech smuggling and drug running enterprise. This endeavour eventually came to the notice of the authorities, and the Familia were forced to intervene in order to prevent a scandal. By rights, Arturo should have been tried and sentenced to life a penal colony, but the Familia were able to use their influence and wealth to avoid a trial. They managed to secure Arturo a Rogue Trader Warrant, (through exorbitant bribery, blackmail and politicking), thus exploiting a legal loophole which allowed him to depart Feston III with his liberty. Of course, an abuses of power of this magnitude is impossible to completely hide, and such nepotism is fuel to the fires of opposition on Feston III, so the Famila had no choice but to excommunicate Arturo. He was gifted a small interstellar craft, along with some traditional weapons and heirlooms, and was duly ejected from the Familia to begin his new life – a situation which suits his wild and reckless temperament very well.

We join Arturo at the start of this journey, as he drafts forces to his service and begins to explore his new, (and greatly expanded), boundaries. There are many pitfalls to negotiate as he struggles to adapt to his new calling, for the path to success as a Rogue Trader is perilous indeed…

So, there we have it! I hope you like how he turned out – I’m pretty chuffed with him from a technical perspective, and I’m glad to get him finished… and not a moment too soon! He’s going into his first action this evening, against Inquisitor Emeric & Co… wish me luck!