Wow, it has been ages since I last posted anything – and with good reason I’m afraid, because I haven’t had anything good to show! My studies continue to dominate my life outside of work at the moment, but I did find time to do some building over Christmas… happily, I have just finished painting the first 5 models of my current project. Here they are: 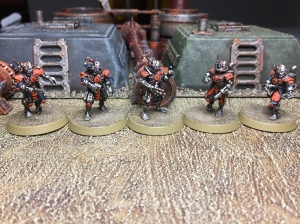 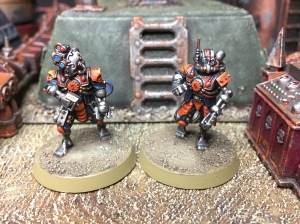 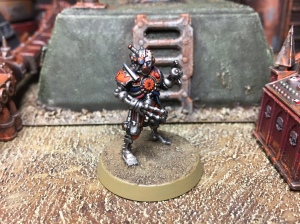 So, what we have here is the result of a lot of thinking, and no small measure of ingenuity on my part. They are unarmed, general purpose servitors for the 40k/RT universe – part of my long running goal to populate my imaginary world with non-combatant figures. Logically, there should be unarmed servitors all over the Imperium in 40k, kind of a Borg backdrop to the main action. I always really liked the idea of the Borg in Star Trek, kind of undead in SPAAACE! I love how they just ignore the away team when they first beam on to a cube, but then mob them when they start presenting a threat – that would be a really cool mechanic in-game.

I’m determined to push myself as a painter this year, and I made sure I was doing so when painting these, (hence they took so damn long!). I experimented with how I do black and took a very different approach to the flesh tones, and I’m quite pleased with both. Also note the dead white eyes… I’m really pleased with how they turned out :-)  Overall, I’m happy, though I may revisit them & add some light weathering in the future, just to tie them in a bit more with their role.

But… ‘Hey you, where the Jeffing-hell is this ingenuity of which you boasted earlier in this post?!?’ I hear you ask. Well, thing is, these are more than simple servitors…  Regular readers of this blog will know that I really do like a bit of reusability in my projects – like my techno-barbarians that also work as a fantasy Frostgrave warband for example. Time is precious y’awl, so if I can get a number of functions out of each mini then so much the better…  I think I may have kicked the arse out of it this time though, because this: 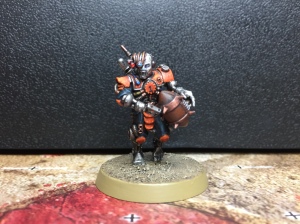 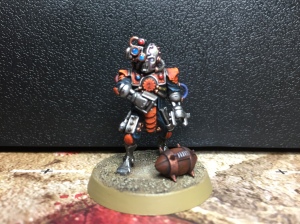 Yup, that’s right peeps, my servitors are designed to double up as Blood Bowl players – specifically, they are proxies for Zombie linemen from the undead team roster – servitors are practically zombies, so it kinda works I reckon! I also built & undercoated the rest of the undead player types needed for a team over the holidays – but again, they are all intended to also work as servitors in their own right. I don’t mind showing you the WIPS for the rest of the team now that the cat is out of the bag.

First up, we have the Ghouls, (scavenger class servitors):

Next we have the Wight blitzers, (security class servitors): 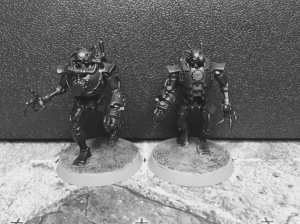 Well, there we have it – this project has been bit slower than usual, but hopefully worth the wait. I’ll be getting the rest of the team painted up slowly over the next several weeks before moving on to something new and rather exciting…  More on that in the future, but meanwhile, you know the score folks – thoughts, comments, questions & feedback are always welcome :-)