Greetings Terrans, I hope you are all well, and that you are enjoying getting back to normal after the festive season! After a slightly disjointed Christmas, I am back into the groove with my Wolf Time project – as a result, I have a new skwad of Scumbos to share with you: 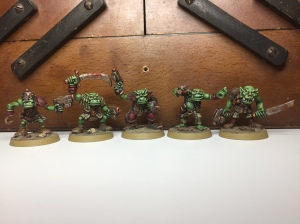 As with almost all of my Scumbos, these guys are converted from various fantasy Orcs, with lots of bits sculpted on by yours truly. I’ve given them all a weathered & scruffy look, with plenty of rust & gunk… even the red spot colour is quite subdued – almost an oxblood brown rather than a true red. I hope that the overall effect is one of a mob of lower caste of Ork, (as described in the scenario), when compared to the better equipped and presented warrior skwads. Im pleased with them, and I hope you like ‘em too :-)

In other news, my buddy Ross and I have kicked off a little side project, based on the AoS skirmish rules presented in this month’s White Dwarf. We’ve both drifted away from AoS a bit recently, but this skirmish system has rekindled a bit of interest. In addition, Ross has precious little time for painting & modelling these days, while I’ll be fitting this in around the rather demanding Wolf Time project… Long story short, the small scale of the project suits us both well.

The ‘rules’ of the project are as follows:

Should be a fun little distraction for Ross and I, and of course, we’ll be pitching our warbands against each other as we go. Furthermore, you can expect a growing background & narrative from me as the project progresses – I already have some cool ideas in that direction which I hope will make for a good read!

That’s all pretty exciting, (for me at least), but I would like to share that excitement with YOU! I therefore encourage you to take part & share your progress on your blog if you’ve got a hankering to do something a bit different this year. Simply choose a faction & follow the guidelines above – simples! Looking forward to seeing who signs up & what you come up with :-)

Anyhow, that’s all from me for now – catch you all soon!