Greetings Terrans, I have another Wolf Time update for you this morning – I’ve finished Navigator Fogg, and an un-named cook from one of the sub-plots… Let’s start with Fogg – from the Book of the Astronomican:

“Like most Orkish navigators, Fogg is a psychic. Orks navigate by a crude process of intuition and primitive divination. So long as they stick to relatively short warp-jumps this works well enough. However, there are occasional accidents, like the one which has stranded the Charadonian fleet in the Wheel of Fire.

Fogg has a psychic mastery of 1 and a psi-level of 10. He is able to use the hammerhand, mental blow and steal mind abilities. Fogg has the following weapons and equipment:

So, as a proto-Weirdboy, I had the perfect opportunity to include one of my all-time favourite minis from the Ork range – the Warphead Weirdboy from 1991. I added a suitable right arm & left upper arm, and then sculpted on sleeves, a brace of holstered pistols & the left forearm & hand clutching a bomb: 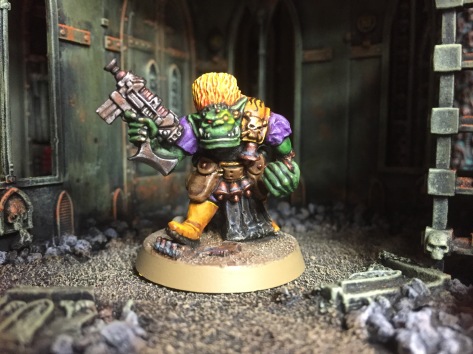 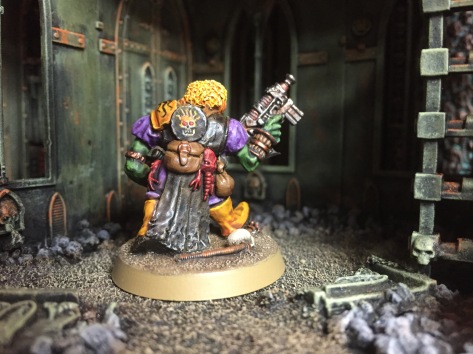 I wish I had done a better job with the left hand – you can’t really see the vortex bomb from a natural viewing angle, but I promise you it’s there:

In terms of painting, I wanted to make Fogg quite flamboyant, so went with bright yellow & purple as the main theme – I love his snazzy yellow boots! His hair got strongly emphasised, as did his crazy eye, complete with subtle glow effect. Other than the slight gripe with the too-subtle vortex grenade, I’m really happy with this guy, and I think he reads well as a crazy-assed psyker!

Now to explain ‘Kulo’s Cook’… There are a number of sub-plots in the final scenario of the Wolf Time campaign, and one of them refers to the cook, (no spoilers!). I wanted to have a few of the sub-plots in my back pocket for when I run the game, and while it isn’t necessary to have a mini to represent the cook, but I thought it would be fun. He doesn’t get named in the scenario, so I’ve christened him ‘Gore-den Ram’s-Eye’:

Ram’s-Eye already had his cleaver, so I just needed to sculpt his chef’s apron & hat, and his right forearm & cooking pot (complete with squig gribble-stew). I didn’t give him a gun, (he’s more of a skulker than a fighter), but I’ll do a bunch of kitchen squigs for him to fight with in-game. I hope I get enough players to warrant using him!

Here’s one last pic of the two together:

And that’s me for today! Just  ‘Captain of the Guard, Rulko’ and Kulo himself to finish :-)