Greetings Terrans – exciting news today! After 8 months, I have completed Rulko and Kulo to finally finish all the Orks for Wolf Time! First up, let’s take a look at Rulko, Captain of the Guard. From the Book of the Astronomican:

“Rulko is the new captain of the guard following the execution of the traitor Gort. Rulko is a nasty ‘stab-in-the-back’sort of Ork. He prefers to advance his cause by underhand dealing rather than by actual fighting. He is armed and equipped as follows:

And here he is:

I used another classic ‘Ork-in-Power-Armour’ as the base model for Rulko, but removed the power glove & replaced it with a metal Painboy arm (donated from Doc Spleenripper!). I over-sculpted the arm to match it to the rest of his power Armour, and did the same with the Doc’s saw to make it into a Chainsword. Finally, I sculpted on a wee Bolt pistol, and converted his main gun to be a Flamer (including fuel tank on the back). It’s all quite subtle work, and I think Rulko really does look like a ‘proper’ figure from that period. He doesn’t really look sneaky as per his character description, but really, how sneaky can an Ork in Power armour actually look? I painted him up predominantly red, and with less weathering & rust compared to the other PA Orks – I figured as Captain, his kit would be better maintained than the other guards.

Now for the big guy – Governor Kulo himself! From the Book of the Astronomican:

“Kulo is in charge of the whole base, the whole island, the whole damn world. He is a merciless, murdering maniac, and thus well cut out to run the planet. Kulo has become justifiably paranoid following several unsuccessful assassination attempts, and now prefers to rule Xit from the deepest and most secure level of Castle Kulo. He is enormously fat, and wears two suspensors just to enable him to walk normally. His maximum move is 4”, which is never increased (to charge etc.). Kulo is armed and eqiped as follows:

Hmmm… Fat, megalomaniac, paranoid, political survivor extraordinaire, names buildings after himself, bit of a cunt… I don’t know why, but Kulo just reminded me of someone. Here’s how he turned out: 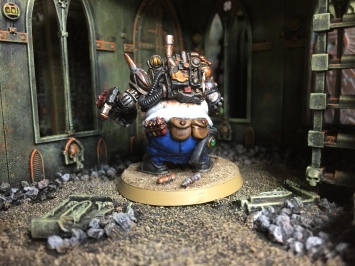 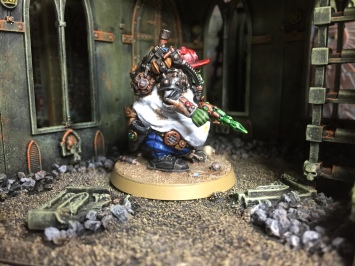 As you can probably guess, the current POTUS was the inspiration for this mini, and the opportunity to poke fun at the big man was too good to miss. Old RT used to be full of political commentary, (Ghazghkull Thraka famously being a mangling of Margret Thatcher for example), so really this is a nod back to those times. I hope none of my American followers are too offended – it’s just a bit of fun.

Appropriately for the head honcho, this was a very involved and complicated conversion… I started with an old Judge Dread Fatty, and added the shoulders & head from the Evil Sunz Nob from the ‘Ere we go range of Orks. His left arm comes from the mini I used for Rulko, and he has twin Bolt pistols mounted on the power glove (otherwise, how would he ever be able to use them!?). The right arm was donated from a damaged LE1 Space Orc that I picked up on the cheap – note the delightfully small hand ;-) I also changed the gun out for a new Neuro-disruptor from the Harlequin mini. Next, I added a backpack from an ‘Ere we go Mega Armoured Nob, and started adding cables and other gubbins to the mini. I wanted the backpack to look like some sort of primitive life support system for Kulo, as well as the generator for his Powerglove. Finally I sculpted on a few details – more suitably sized feet, collar & (power) tie, baseball hat, pouches, a holster & doodabs.

Paint-wise, the armoured bits were a mix of grey and black, rust and gunk. I went with the classic power-dressing blue trousers, white shirt & red tie, and the ‘Make Xit Great Again’ hat finishes the look. The Neuro-disruptor was a faff to do – I’ve never painted a crystalline gun before, so it was a bit of an experiment… I hope it works!

Here’s Kulo with his Captain, just to show the size difference between the two. Kulo is obviously a hefty lad, but I don’t think he’s so big that he looks out of scale:

Finally, here’s a group shot of all the characters from the final scenario: 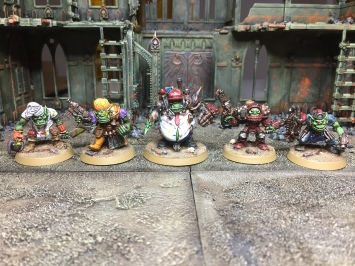 And that completes all the Orks for Wolf Time! Want to see what a full set of Wolf Time Orks looks like? Of course you do :-)

Now it’s time to start the Marines, so I’ll be in another building & prep phase for a while & I won’t be posting for at least a week. Next time I do post, it’ll be all about the Space Wolves. Haarooo!!!