Greetings Terrans, how goes it? I wasn’t planning to post today – I’m busy working through terrain and wanted to get a bit more done for a more involved post, but I had a reminder that Lead Balloony is 5 years old in my feed today, so I thought it an auspicious day for a cheeky little update 😊

So, if you’re anything like me, you’ll know that the best way to celebrate any birthday is with a bit of casual sacrilege and some light-hearted iconoclasm. Happily, the Wolf Time campaign provides the perfect opportunity to indulge with the iconic statue in the first game. From the book:

“Years ago, before the Orks arrived and made everybody’s lives miserable, (and short), Temple Mountain was a place of peace and solitude. Every year the islanders made sacrifices to the gods with which they imaginatively peopled their island. Twice a year they celebrated the passing seasons with a great procession to the temple which their ancestors had built thousands of years previously. The guardians of the temple were wise oracles who would offer advice to the ordinary folk. Once in a while, a young child would be offered to the guardians and, if accepted, would be reared in the temple to become a guardian himself in time.

Then the Orks arrived and killed everyone. They desecrated the large statue which the humans had carved in the likeness of one of their gods, and turned it into a grinning Ork.”

“The statue in front of the temple is also made of solid rock, and can provide had cover for up to two models”

We also have some artwork to go on: 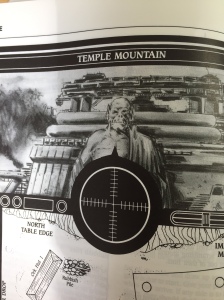 And most famously, the cover of The Book of the Astronomican by Tony Roberts:

So the rules say ‘provides cover for up to 2 models’, which is tiny, but the art shows a vast statue that would be impractical to build and game with. I think the game map is actually the best guide for scale, which suggests something about 6” wide:

While the artwork is not very helpful for scale, it is fairly consistent on the appearance of the statue, and it strongly suggests using a buddha as the start point. I also like the addition of the sword in the cover art, so  after quick trip to a local hippy shop with an idea of scale & armed with the cover as a reference, I ended up with this:

This has probably royally fucked my visa to Thailand, but I’m sure you’ll agree, it’s pretty much instantly recognisable. The head & sword were sculpted over a wire frame and a coffee stirrer respectively, and I textured up the base before spraying the whole piece black, and then again with grey. I then painted the statue with typhus corrosion – I find that this gives otherwise smooth surfaces a nice texture, and I use this method a lot for stonework. After that, I just drybrushed the whole piece, added different washes to the old & new stonework to show a difference, and adding spots of lichen to the older material. I finished up with a final light drybrush and some foliage & tufts to bed the piece into the ground and because FUCKING OLD-SCHOOL, and I ended up with this:

And here’s another shot with a spare Ork & Space Marine Bastard for scale:

So that’s it folks – I have a lot more campaign terrain in various stages of completion, but it’s good to get the most iconic piece of terrain done & set the tone for the rest of the project. I just hope that this doesn’t have any cosmic ramifications! :-/