Greetings Terrans, how goes it? It has been a busy time at balloony HQ! With a ton of terrain to work through, I have focussed on scenario 1 for the time being – Ork huts, rubbish piles and a great big fuck-off temple (BFT for short).

First let’s take a look at the huts: 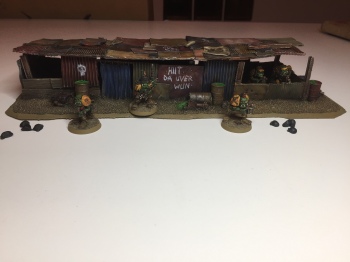 I reckoned that the map called for something about 12” by 4”, so I needed something in kit form that could be tailored to fit. After some research, I decided to use a kit from Crooked Dice – they have a good generic scrappy look to them, and the kit design gave me plenty of options in terms of size. They were a bit of a faff to assemble, but were worth the effort I think. The tops are removable so it is easy to use the indoor space during a game, so I built them with the idea of being able to use them as a fire base (with numerous openings and such). I also did a load of bin bags & grubby mattresses to use as ‘indoor scatter’: 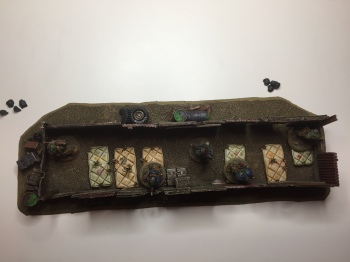 I went in with a heavily stained & rusted look & added some little humour points – Badyear & Dung-lob tyres, suspicious stains, graffiti, etc. Probably the best thing about these huts (and the crap inside them) is that they turn up in the first three scenarios, so they have great reusability in the campaign.

Next, we have the rubbish piles:

Again, these are from Crooked Dice, and were treated in a similar way to the huts but painted to look even more grungy. Not too much else to say here – these are just generic scatter/light cover, and are likely to turn up in multiple scenarios too.

Finally, we have the BFT…

When I first decided to take this project on, (11 months ago!!), I knew that I would need something MAHOOSIVE for this. The map shows the temple platform as being around 24” by 18”, so I took a punt and sent a letter to GW, asking them to release a suitable kit… they were very obliging with their new Domain of Sigmar Shattered Temple – great job guys, and just in time too!!

Ok, so I made that last bit up, but I was genuinely delighted with the release – it really is the perfect solution. I made the temple in three parts – the biggest central bit and two smaller wings. I chopped the steps off the long edges of two kits, and glued them together to make the big central section. I drilled out one of the round vault bits to make a hole for the grav lift – spookily, the vaults are exactly 3” in diameter, just as specified in the campaign. I glued in a suitable pot to complete the lift, and arranged the pillar supports to level off the sides where the centre section would connect to the wings. The wings themselves were far more straight forward, and are just the basic temple with the pillar supports all down one edge to connect to the centre, (I really like that the kit allows you to do that). Finally, I glued the pillars that came with the temple into sets of four to make six chunkier pillars, and these just sit on the temple platform as required. I decided to deviate from the game brief slightly and not bother with a roof for the temple… I figured that it would be pretty redundant gamewise, and that it would just be in the way. After that, it was just a case of treating the stonework to some texture, and setting to it with spray can, washes and drybrush. Here are all the component parts: 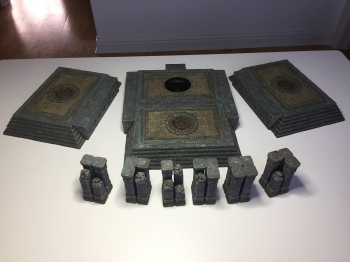 And here’s a mock-up of the first game of the campaign: 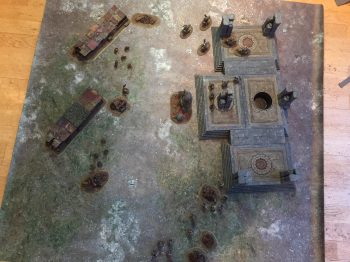 And as a reminder, here’s the map:

Phew! That’s it for this post, and with less than 4 weeks to go now, I’d better get cracking with the rest of the terrain! Catch you next time… :-)