Greetings Terrans, how goes it? I know it has been quite idle on this here little blog, but I’ve been far from idle behind the scenes! I’ve been working my way through more terrain for the second & third Wolf Time games – mostly items to do with power generation. Let’s go straight into scenario 2.

Scenario 2 is set at a geologically active area of the island – one where sudden and violent winds howl through a network of subterranean tunnels, occasionally breaching the surface with explosive results! I’m paraphrasing, but basically the Orks have rigged up a huge turbine from bits salvaged from their crashed space craft – this single large building caps a permanent blowhole in a rather precarious way, has a single double door and a wooden watchtower accessible from the roof. The generator is in a walled compound, along with two long huts (so reusing the ones from the first scenario), The Orks also have four control valves located around the facility to manage the flow of gasses to the generator. I haven’t built the walls yet, but the rest is done, so let’s take a look! 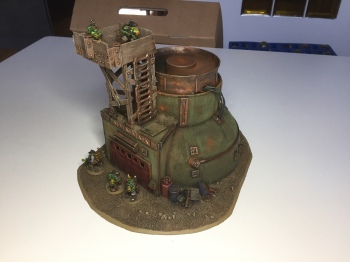 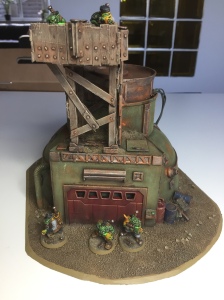 This big beasty was basically assembled from a takeaway food bowl, a section of cardboard tube, an old pc fan, thick card and coffee stirrers. Additional detail was added from the ever-useful ‘Maelstrom’s Edge’ terrain sprue, plus a few odds and ends from the bits pile. Once primed, I textured the main building with Typhus Corrosion before spraying again with a pale green, and then washed, drybrushed and weathered the hell out of it. You’ve probably noticed that the turbine fan appears to be moving in the pics – that’s because it is! I figured out the wiring & plumbed in a 9v battery to spin that bad-boy :-) 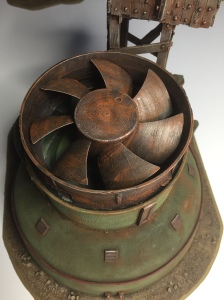 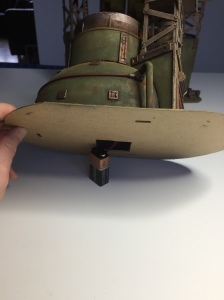 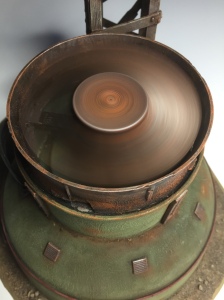 And here are the control valves for the same scenario (pictured with a commanders hut for scenario 3 – slightly confusing know, but ignore the hut for now):

Nothing special to report here – all are from Crooked Dice, and painted in the same way as the long huts I presented in my last post. Right, on to the next scenario!

Scenario 3 is set in a lava field set in the midst of a stone forest. The Ork compound has two tall, cylindrical heat exchanger towers, each with a tall wooden watchtower with an emplaced Heavy Bolter in each one. The compound also has two long huts (again, reusing the ones from the first & second scenario), as well as a smaller hut for the commander and a tool shed. I haven’t finished the shed yet, but the rest is done – as before, let’s start with the generators: 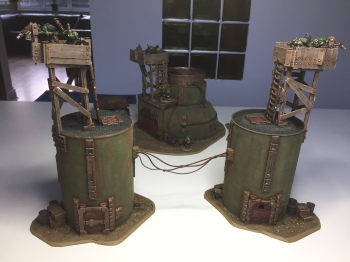 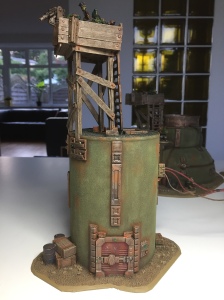 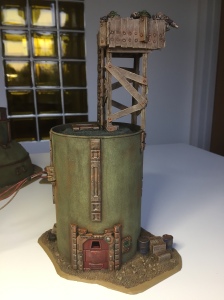 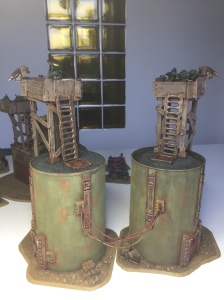 These were fairly simple to build – the main buildings are just cardboard tubes with a bit of Maelstrom’s Edge bling, and watch towers built from more coffee stirrers. The heavy Bolters are on magnets, so can be placed on any of the pintles set around the outside of the watchtowers, (including the big building from scenario two if I choose). I also set some magnets inside the tubes, with the idea of connecting the two buildings with some cabling. The cable junction boxes are small crates with the handles shaved off, magnets set inside, and wires glues into small holes.

And here is the commander’s hut for the same scenario – with the roof off this time: 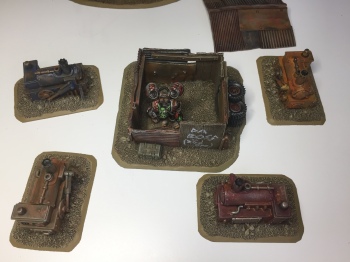 Nothing special to report here either – the hut is also from Crooked Dice, and painted in the same way as the long huts I presented in my last post!

So that’s it for Orky generators, but there is one other generator mentioned in the game – a phase field generator, that may be available to the Marines to use in the last scenario. I couldn’t find a picture of a phase field generator anywhere, but the Rogue Trader rulebook describes it as a large, heavy bit of kit that temporarily phases a small patch of matter into the warp, allowing models to create a doorway through any solid object. Of course, the field isn’t 100% stable, and can collapse with spectacularly terminal results for anyone caught inside the field when it pops! I bashed together a fairly industrial-looking bit of kit from bits & pieces to do the job, and gave it a very quick paintjob in Space Wolf colours: 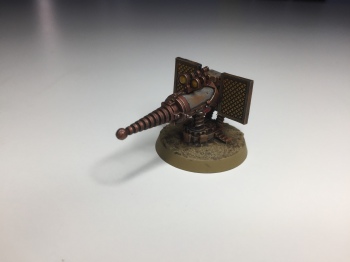 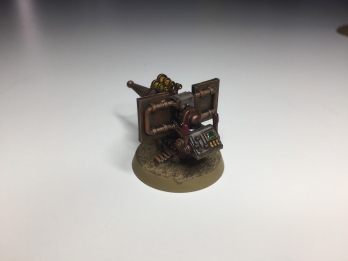 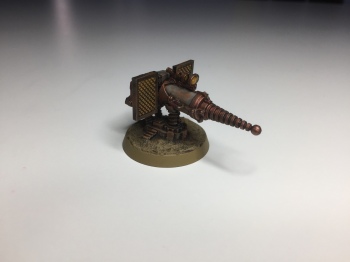 I quite like the end result, despite it being a low effort affair – it actually ended up looking quite steampunk! Here’s a final shot of some Marines trying to phase their way into an Ork building: 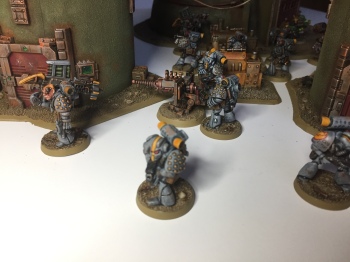 So that’s it for now – I have just 15 more days to finish the project! There are other odd jobs that I may or may not get time to do – walls etc. but none are vital to the scenarios, so I’m counting these as stretch goals… However, the final critical bit of the project is a biggy… Kulo’s Castle… Wish me luck!

34 thoughts on “Power to the people!”