Hello chaps, yes, as several guessed over on Facebook, the secret project was an assassin of some sort… the spooky psyker-busting sort! Unfortunately, my Monday oppo was a no-show –some blessing from Nurgle is allegedly to blame, but personally I suspect that the Lord of Change sensed the strands of fate didn’t bode well for the Stormbringers, and he pulled a sicky (just as planned).

Either way, I haven’t had the chance to test this little beauty out yet, but the codex entry looks like this thing is death to psykers – not a bad thing, because two armies that I really struggle with (Demons & Eldar) are psyker-heavy. I can’t wait to give her a whirl! Anyhow, here are some pics:

Here are some WIP shots – she is based on an old harlequin, studs and other surface detail removed. Arm/hand are from the old Eldar range – generic plastic for the left, a support weapon operator for the right (complete with pushy button thingy for firing with). The head is mostly GS with a skull front from somewhere, (again, human sized was too big), with bits of Necron tech and assorted wires to make up the Animus Speculum. The model Is finished with various grenades and stuff around the waist (to represent psyk-out gear), and a GS belt. GS was also used to bulk her up a bit, cover up the obvious Eldar armour plates, and generally give her a more ‘human’ outline… 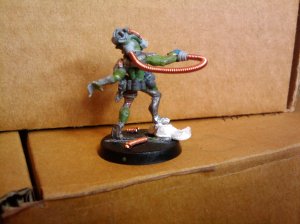 I went for a straight forward paint scheme – mostly black (duh) with plenty of metallics around the place. I’m quite pleased with the antique-looking grenades. Some red is used as a spot-colour, just to bring her into the army a little. 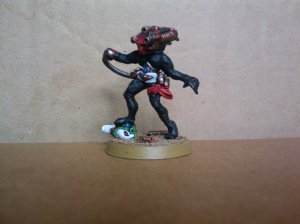 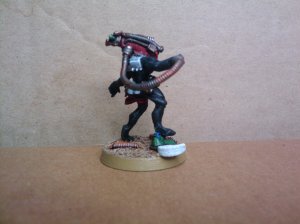 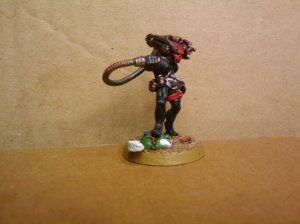 So, there we have it – a free Culexus Assassin! To be honest, I’m not a fan of the proper GeeDub Culexus model, it’s a bit cartoony for my taste, and I actually prefer mine in terms of pose and mood. My sculpting skills aren’t amazing, but hey, it’s the first time I have tried something of this complexity, so I’m not displeased with the result :-)