So, here she is! Obviously there is a bit of fettling to do and details to add, but essentially the build is complete – behold! 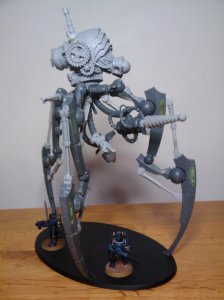 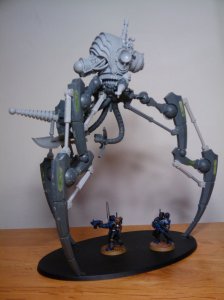 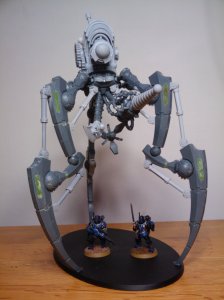 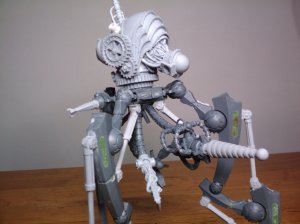 Obviously there is a huge H.G. Wells influence here – but I wanted the machine to be much less streamlined and more industrial, like the awesome ‘Great Martian War’ trailer here (History Channel, courtesy of BoW). I wanted to keep the weapons generically sci-fi and versatile – I can imagine that big Tesla coil acting as a repeating shock cannon or giant heat ray, meaning that the tripod ‘makes sense’ as either of the main Knight variants. I suppose I could have just gone with Knights, but it didn’t seem right somehow – this is much more Victorian/steampunk in my eyes.

In terms of fluff, the Tripod was the ingenious Praetorian solution to the need for an agile mode of travel across the blasted wastes of their home planet. These machines are used widely among the mining unions of the hive world, but the idea of weaponising the rugged frame was first conceived many centuries ago by Chief Engineer Mulvaney after he saw Imperial Knights in action on a distant campaign.

Lacking the bulk of a Knight, the Tripod chassis was not ideally suited to carry conventional Imperial ordinance, and Mulvaney struggled to get a useful weapon system mounted onto the machine. Undaunted, he began experimenting with an obscure system that delivered huge electrically generated kinetic blasts for the mining industry on Praetoria. With some adjustment and experimentation, Mulvaney managed to achieve a performance comparable to the standard weapons of the time, and he complemented this firepower with the addition of smaller anti-personnel versions of the system, a huge power blade and localised force field projector (also adopted from the mining cartels).

The natural ingenuity and persistence of the Praetorian engineer resulted in a machine that was the equal of the Imperial Knight in all respects, and the machines could soon be seen striding alongside the glorious regiments as they executed their duties.

7 thoughts on “Presenting the Praetorian Tripod”