Hi folks, I can’t believe it has been nearly 3 weeks! It has been really busy with work and study, but I have been working my way through the leadpile as promised… I have just about finished a new 10 man squad, and I have some bits on the way to convert up a few interesting chaps as well. Hopefully more on that next week, but today I want to let you know about a beautiful Vostroyan army I fought last night, lovingly collected, converted and painted by Matt. Now… I am lucky enough to know some extremely talented painters, and I have played some truly stunning armies, but last night was the first time that I have actually wanted to own the army that I was up against. Check this Lt. out, and you’ll see what I mean: 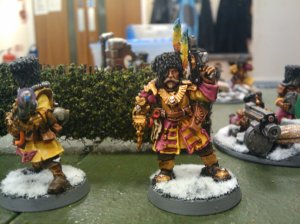 Now, I should explain that when I got back in to the hobby, it was a really close call between Praetoria, Tallarn or Vostroya – I love all the models associated with each homeworld. In the end I went for Praetoria… The WD battle report ‘Attack on Glazers Creek’ is etched in my memory, and I also think it’s a bit of a Welsh thing… Zulu and all that! But I still have a soft spot for the others, so it was a joy to see such a well painted and thoughtfully converted force of First-born. I particularly enjoyed the fluffiness of it – this isn’t a finely tuned killing list, but a carefully selected collection of really really cool models. For example, the conscripts are actually a collection of Valhallans with the odd Delaque Ganger thrown in for good measure… some of the plasma gunners have jets of plasma shooting out of their guns… the Demolisher commander is wanging a shell case down on the head of some unfortunate, the army warlord is riding a bear ffs! Every squad had something awesome to discover, and every model is lovingly painted and presented. Here are some snaps, but they really don’t do this army justice at all, (Matt – you need a website!): 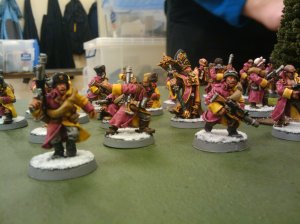 The game itself was a bit one-sided. All of my troops got deaded, (variously blown to bits, burnt to a crisp, gunned down or deserted), but my artillery and Valks were still doing their thing, and my Tripod Knight was running the show like a boss. It took a shoeing, but managed to neutralise everything that could threaten it and then it had the run of the board. The First-born took a fearful beating – pie plates and packed guardsmen are not happy bedfellows, and most of the tankage was dealt with by the knight. We called it at turn 3, but it was only a matter of time.

That said, we still had a good game – Matt is still getting to grips with Guard so it was very much a friendly, and we had a good laugh. His list reminded me of how I ran my Praetorians last year – loads of lovely troops and a liberal smattering of armour. Unfortunately, I found that I regularly lost, and I got tabled more than once. I’m still working on a competitive list and I just took the latest iteration by default really, but next time we play I will run a bloke-heavy list – we shall have a proper infantry scrap, and it will be a thing of beauty. I am also hoping that one day we can team up against another stunning army and create a huge spectacle of everything that is awesome about the hobby. Most of all, it was a privilege to play against such a nice bloke with such an inspiring army. Much respect due.