Hi guys, quick one today – I’ve done a bit of finessing on my existing warband members on and off this last week, and have got them primed and ready to paint. The not-Avengers got their sleeves, their fur, and their fetishes, as did the huntsmaster. I also ditched the heads that the huntsmaster was carrying, (good call Lasgunpacker!), and replaced them with a cool hunting horn. Much more hunty I think ;-)

Here’s a couple of shots, (including some 360 action so Thomas can check out my furry bits): 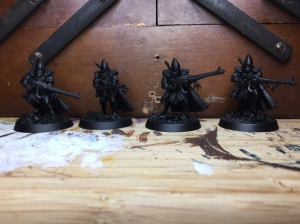 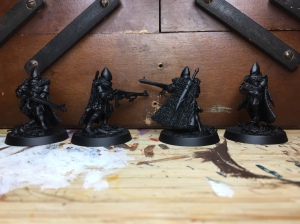 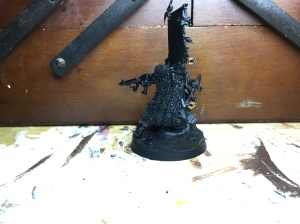 I also got my Spiritseer advanced to the same stage. I took a lot of the good advice offered and gave her some Eldar style nodes/nodules, (thanks Azazel!), some bling, and a loincloth, (‘packer again!). The crow was a late flash of inspiration, and fits beautifully I think: 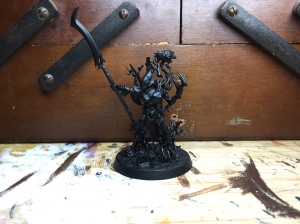 Finally, I bashed together a rough Wraithguard concept last night… The posing is really bloody difficult with these ultra-engineered kits, so finding two arms that work as independent sword arms was a pain in the buns… I think they’re ok, but could do with some other opinions on the matter. I’m also going to try and drop that left leg so that it’s striding purposefully rather than running – I think that would help a bit. I’m also worried that he’s just too big to be a henchman…  What do you guys think?