Greetings Terrans, how goes it? All good I hope :-) I’m really excited to be sharing this post with you today – I am finally on the home stretch with the Wolf Time Ork project, and we’re getting to the really really interesting bit… the mythical ‘Guards with power armour & chainswords’! Now, some of you might be wondering what the big deal is – maybe you’re only dipping in to this project recently, or maybe (like me) your memory is more suited to remembering how much damage a Heavy Bolter does in RT* than what you had for breakfast… Either way, I’ll offer a quick recap.

One of the guiding principles of this whole project has been WYSIWYG** – I cut myself some slack with the difference between flak or mesh armour, but I wanted every knife, bolt pistol, grenade, hand flamer etc. correctly represented on every miniature***  I also wanted to use period models as much as humanly possible & avoid the later ‘Ere we Go’ minis with plastic arms… (a couple of these slightly later minis did find their way in for some of the characters, but not too many.)

The problem is that many of the loadouts specified in the campaign pack never existed in miniature form, or were only represented in a couple of models. The Skumbos (bolt pistol & sword) are a good example of the latter condition – there were a couple of minis that suited, but not enough to do a full 25 without chronic duplication. The ‘power armour/bolter/chainsword’ combo is an example of the former… there simply wasn’t a period mini that represented that load out at all. In both cases, my approach has been to attempt to sculpt what I needed – proper Old School :-)

I’ve been showing you the skumbos over the last couple of months – they have loads of sculpted details like pistols, scraps of armour, swords & scabbards etc. All in all, quite a lot of effort… However, the Guards were a whole different level of work – we’re talking 18 full ‘over-sculpts’ of power armour, 3rd party chainswords, bionics, the odd gun-arm… basically this involved hours and hours of sculpting in and around other bits and pieces – hence the excitement in getting some paint on them! Here are the first two squads – Red and Orange:

And here are some closer views in pairs: 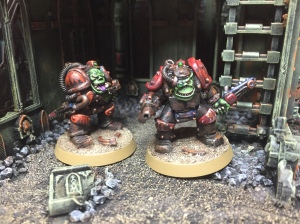 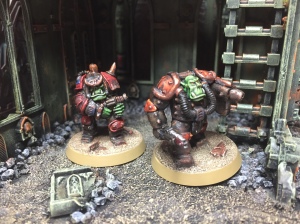 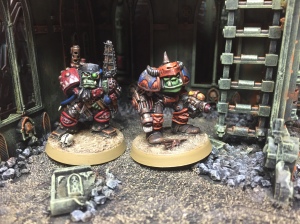 That last pair was the squad leaders – they get a hand flamer each as well as the bolter. The orange guy is the only ‘as is’ power armoured mini in the whole group but he still needed his hand flamer sculpted on. Note his chainsword is actually part of his gun-arm.

I also thought it might be fun to compare a Skumbo, a Boy and a Guard as well – I’ve accidentally managed to get quite a pleasing range of sizes:

And one final shot of all 10 Guards together:

So there we are – 10 down, 8 to go. Are they perfect? No, of course not – they are lumpen and misshapen, rough and ready. Some have worked better than others, and some are frankly ridiculous. Was it easy? Hell no – sculpting is bloody difficult and time consuming, but I learned so much through doing this… I think it’s fair to say that while my sculpting is still pretty meh, it did improve a lot through this process, and I’m certainly a lot more confident pushing putty now than I was before.

In that sense, I think I’m calling these a complete success :-)

*D4 Damage(r) – if you knew this, and if you can’t say D4 Damage without adding the ‘r’ and immediately following with ‘power to the people’ or ‘with the ill behaviour’ then I may actually be in love with you.

**What You See Is What You Get – your model is a true representation of the army list.

***One sneaky Boy is passing his Heavy Bolter off as a regular one… I’m allowing this because the Heavy B is tiny, and because I can’t handle perfection. Sorry Paul.