Hello chaps, I can’t believe it has been almost a month since I last posted! Life has been pretty hectic with work, travel & studies so I’ve been on a real go-slow on the hobby these last weeks… What little time I have had has been spent on what is (I feel) by best project to date. L’s and G’s, I give to you…

Håkan Vargskalle, leader of the Brothers of the Crimson Howl: 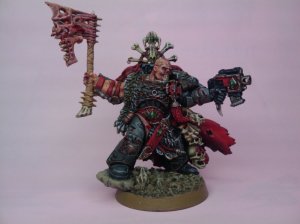 I’m still kicking round a backstory for this guy, (and for the Crimson Howl in general), but clearly it’s gonna be a ‘Space Wolf gone bad’ story. I imagine murder, betrayal, insanity and the insidious whisper of Chaos have all conspired to twist the fate of Håkan – a fate that continues to lead him down a very dark path. I really tried to capture the idea of being on a downward spiral into damnation with the model – I wanted to hit the sweet-spot in between crisp’n’shiny Imperial and spiky/skully Chaos. I hope that I achieved that – the power armour is much darker than the usual pup-grey and there is a lot of wear & tear and a general shabbiness about him – there is no doubting that this guy is/was a Spacewolf, but the face & axe tell us that he is well on his way to being something else entirely…

From a modelling perspective, this was actually a fairly simple kit-bash – He’s mostly Krom with the head, arm, axe and chain-o-skulls from the Skullreaper/Wrathmonger kit. There were a few gaps to fill, and a bit of GS needed, but nothing heavy. I absolutely love the head and face on this guy – or what’s left of his face anyway… I love it so much that I came up with an idea about how he lost his kissy-lips as I was putting him together. There was no collar on the power armour following the head swap, so I trimmed the edge off a Wrathmonger armour plate and used that… it kind of looked like a blade, but with the sharp bit facing inwards! I should have taken a top-down photo, but trust me – the blade is there, rusty and smeared with old blood. The idea is that the insanity that is that is possessing this guy has convinced him to make arrangements for his own head to be offered up to who-knows-what should he fall in combat. Over time and numerous battles, this blade has been slicing away at his face until he has been left as we see him today.

In terms of painting, there is so much going on with this model – power armour, flesh, bone, cloth, fur, metal, detail, odd shaped gems… it was a real challenge with quite a few learning curves to, um, learn… I’ve never painted power armour before for example – in fact, this is my first ever Marine!! (big thanks to Wudugast for inspiring me to give it a go!).

Those pointy gems were a novel challenge as well… I wanted something dark and opaque rather than the frosty blue that we are used to seeing. My wife suggested I go with green, and I think that was a good call, (cheers hon!). I added little flecks of red to hopefully make them look like bloodstones. The axe was fun too – again, my wife pitched in and suggested a purple wash, and I’m super happy with how it came out. The face was great fun to paint and is probably my favourite part of the model. There are loads of different washes and effects going on here – I’m particularly pleased with the veins, the transition between flesh and bone, and his eyes are scary-good! Finally, I used loads of technical paints on the model – rust… verdigris… corrosion… I threw the kitchen sink at this guy, and then blew some ‘blood for the blood god’ all over the place to get that ‘I’m busy chopping shiz up’ look. Anyhow, here are some more pics: 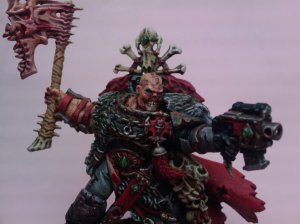 Clearly, this is one dude with whom you do not f***!

So! All in all – a very involved and enjoyable little project! I’m going to work on a buddy for him soon – probably the Stormclaw terminator sergeant. He’s going to be even further down the path to damnation than Håkan, so that’ll be cool. I’m also slowly basecoating space pirates for fun :-)

Until next time dudes – keep it (un)real.