Hello chaps, quick post from me today… So, I had my first ever game of Frostgrave on Monday night, and what a laugh! I didn’t do much in the way of recording a blow-for-blow account, (too busy figuring out how to play!), but I can tell you that it is good fun. I think both Ross and I were quite conservative throughout – Ross lost 2 chaps while my Warhound bought the farm, and we ended up with a 3-3 draw on the loot front. Our wizards/apprentices never even set eyes on each other, so we were being over-cautious I think :-)   Highlights were Ross ‘Leaping’ a thug up to claim treasure from a very high ledge, only for me to ‘Crumble’ said ledge out from under him, (and then the falling, the screaming and the dying), and Ross’ wizard killing my Warhound with one hefty whack of his staff.

Objectively, it seems rather easy to play for a draw in a standard game, and that was a little disappointing… We realised that we were on for a draw pretty early on, so we pretty much went for damage limitation after that. I think we’ll be going for some scenarios next time to make it more interesting. The game mechanic itself is pretty slick, and the d20 roll can really chuck out some crazy results. Magic, and the use of it is key to the game (duh!), so choose your spells wisely, and don’t be afraid to get stuck in! We only managed one mook-fight, and apparently archers are pretty ineffective…

One big surprise was how much fun we had with all the ‘out-of-game’ stuff, (we decided to start a campaign, so we did all the injury rolls, treasure rolls, etc. right after the game). All in all, despite the ‘pick up and play’ billing, it is quite a rich game with plenty to think about on the strategy side and a fairly simple mechanic that is easy to get you’re your head around and that doesn’t get in the way of play. My warband is already expanding, because I rolled up a ‘magic crossbow’ as one of my treasure items, so (of course) I needed a crossbow dude… with crossbow that looked like it might be +2 better than a regular crossbow… in a techno-barbarian style…  I had a quick rummage in the lead-pile for a mini that fit the feel of the warband last night, and then got busy with the cutting, the gluing and the sculpting: 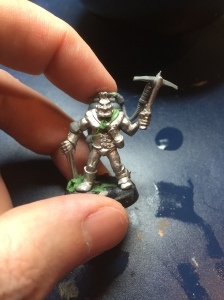 Compressed air-powered crossbow with sniper scope? Yeah, that’s got to be +2 better than a regular crossbow, right? Now, to get him painted for the weekend! :-D