Hi folks, I got back from my camping trip last Friday, and I’m still absolutely knackered – turns living in a field with two lively kids is hard work! We all had a great time, but it’s good to be back in civilisation… I really missed central heating, hot running water, my wife, and (most pertinent to this blog) my paints! Luckily, I have a number of minis based and undercoated, ready for a quick painting splurge, so I had a good session over the weekend and cranked out 3 additions to my mook squad/PDF… a series I am calling ‘The good, the bad, and the ugly’ for reasons that should become clear…

First up, ‘The Good’. This is an old (1987) Citadel piece produced under license for a roleplaying game called ‘Chainsaw Warrior’. He’s quite a ‘flat’ sculpt, which is fairly typical of the time, but I quite like the little fella… He’s properly tooled up for action, and he brings some much-needed heavy fire support to mook-squad: 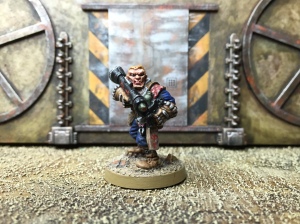 Next up we have ‘the bad’… This is a piece from the 1991 Adventurer range, and he is a really odd sculpt – the folds in the cloth are quite soft and puffy, and he has a face like a witches tit. That said, he actually painted up quite nicely! And then I decided to try and do some OSL for his glowy sword-thing… (for some reason, I thought that glowing swords of light might be a catchy idea in a sci-fi setting…don’t know why). I’m less than pleased with the result – it’s not what I had in mind at all, but I’ll live with it for now and see if I can fix it up at a later date. Anyhow, he’s on the team to bring some leadership to mook-squad: 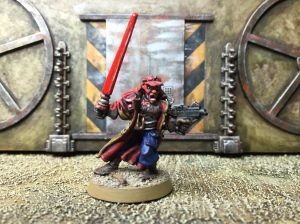 Finally, we have ‘The Ugly’. This is another old (’87 again I think) Citadel piece produced under license for a roleplaying game called ‘Paranoia’. This is a really odd sculpt, with an almost medieval design to the helmet which just leaves the guy’s snaggle-toothed mush hanging out… judging from what we can see of his face, it’s probably a good thing that the bulk of it is covered up! He’s quite lightly armed and equipped, so at some point during the painting I decided to appoint him the role of Medic, and it is in this capacity that he joins mook-squad: 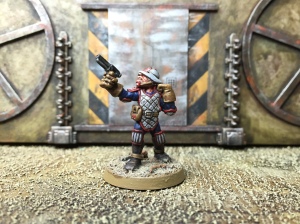 I have a couple more figs that are undercoated and ready to add to this group, (and I suspect that the group will grow even more over time), but here’s a shot of the whole crew as it stands: 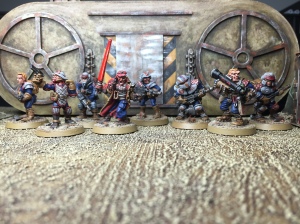 So, as well as a frenzy of painting, I also found time to work on a little piece that I’ve been quietly putting together for a little while. There is still a way to go, but he’s ready for a sneak preview… 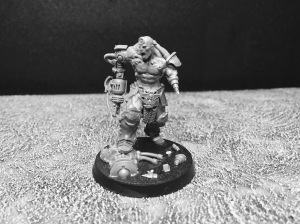 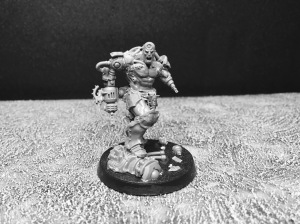 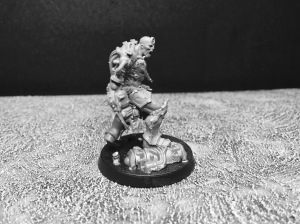 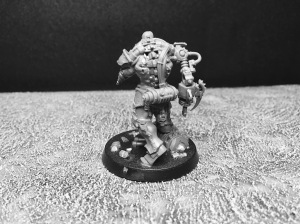 He’s based on the rather excellent ‘Slaughter Priest’ mini for AoS, combined with many and various ad-mech bits and bobs… I have no idea what to use him as – pit slave most likely, but maybe part of a bAd-Mech warband or something similar… Oh, and sorry, but no prizes for guessing the inspiration here ;-)   Anyhow, that’ll do for now, have a good week chaps, good to be back.