Hello chaps, just look at what came through the letter box the other day: 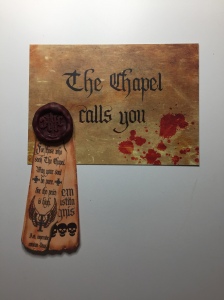 Now that is exciting enough by itself, but Mark of heresyofus.com was generous enough to drop a few yummy Black Earth goodies into the box too! (Thanks Mark!)

Speaking of generosity, by brother-in-lead Ross ‘twigged’ my recent forest/woodland obsession, and gifted me an unwanted Citadel woodland set over the weekend – all built and undercoated, ready to rock! (Thanks Ross!). I’ve been dabbing away at it on and off these last few days: 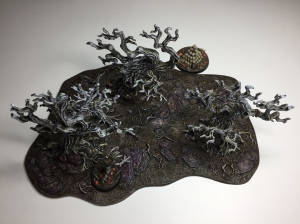 I love how this came out – I specifically wanted this to match my test dryad thingy, and I think that I managed to do that – she blends in nicely, don’t you think? This is really starting to build up my vision of the Albino Forest, and I’m looking forward to chopping and changing a few more of these kits to develop this further. I’m still not sure whether to stick some leaves & tufts on the base or not, as per the test bases I did recently… I reckon it would look awesome, but I’m worried that it’ll be overly fragile on a gaming piece. I’ll have a think on that, but I suspect that practicality may be taking a back seat on this one ;-)

Anyway, that’s all for now – slowly finishing up my Ostium Guides and then on to the warband proper, with more woods & forest baddies to build and paint on the side!

Hi guys! Wow, a second post in the space of a week! I’ve had a real surge in creativity this week, which has coincided nicely with temporarily having a bit more time on my hands. I have taken full advantage of this, and dived into The Chapel project with a couple of test pieces prior to starting the warband itself. Here are a few shots of some kind of forest daemon and an Ostium Guide shrine – the aim here is primarily playing with wood (fnar fnar), practicing some basing techniques, and getting my eye back in with freehand on that tiny shield:

I really like the new Dryad kit, but I couldn’t resist the temptation to make a really creepy example. I’m still working on the fluff for this particular creature, but suffice to say that she’s bad news… I’m particularly pleased with my efforts at painting silver birch bark on her right thigh:

And here’s a close-up of the guild heraldry for my Ostium Guides – it’s a wee bit rough but hopefully you get the idea – it’s supposed to be a candle, (a guiding light so to speak), in front of a white tree. The meaning of skull beneath is pretty obvious I think :-) :

And finally, here’s an update on my guides following some GS work. They are undercoated, based and ready to paint:

I’m super excited about all this – the plan is to try and finish up the guides over the weekend, and then to get started on my warband… I also want to do more forest daemon thingies, and a whole haunted forest for them to play in! Watch this space :-)

Hi guys, so good to be posting today. It has been ages since my last post, I’ve just been so damn busy! But hey, good news – I’ve finally finished up my heavy servitors/mummy blockers, (‘mummy blockers’ as in Egyptian undead wot do blocking rather than things wot block Mums…)

To be honest, I found the whole Mummy thing pretty tricky to reconceptualise as a 40K servitor… I mean, what is the deal with Mummies? Surely they are just wrapped-up zombies, yeah? They should be human sized, yeah? So why are they so strong compared to regular zombies?? Don’t tell me… because magic, right?    Right…   *sigh*

Look, I know it’s only pretending and all that, but the whole ‘Mummy problem’ gave me some headaches when planning this project. I was torn between making pimped out human-sized servitors, or going with something that reflected the Blood Bowl stat-line. In the end, I went with option two because I wanted these guys to read as being slow, strong and very well armoured. I used Stormcast Eternal legs and the torsos from the Kataphron kit to give a really chunky industrial look, and used Kataphron heads as well to tie them in with my Zombie Linemen. The arms were a bit hit and miss – I kind of tried for an asymmetrical heavy-lifting idea on their right hand side, but I’m not sure how well that came off. I also got lazy and used a servo-arm on the one guy, and the grabber from a servo-arm on the other, and wish I hadn’t. I think they look awkward and skinny, but done is done. Here they are – see what you think: 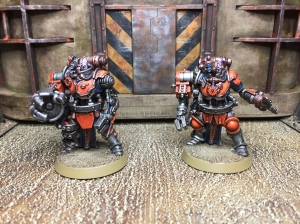 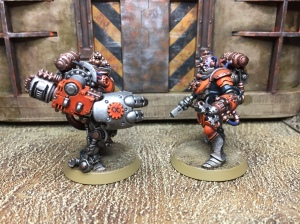 To be honest, these are my least favourite models in the project, but I’m not going to lose any sleep over it – I can always revisit this in the future after all. The important thing is that the team is now complete, and here they are – the Clockwork Orange in all their glory:

Now… time to get immersed in the Chapel >:-)