Hi guys, so good to be posting today. It has been ages since my last post, I’ve just been so damn busy! But hey, good news – I’ve finally finished up my heavy servitors/mummy blockers, (‘mummy blockers’ as in Egyptian undead wot do blocking rather than things wot block Mums…)

To be honest, I found the whole Mummy thing pretty tricky to reconceptualise as a 40K servitor… I mean, what is the deal with Mummies? Surely they are just wrapped-up zombies, yeah? They should be human sized, yeah? So why are they so strong compared to regular zombies?? Don’t tell me… because magic, right?    Right…   *sigh*

Look, I know it’s only pretending and all that, but the whole ‘Mummy problem’ gave me some headaches when planning this project. I was torn between making pimped out human-sized servitors, or going with something that reflected the Blood Bowl stat-line. In the end, I went with option two because I wanted these guys to read as being slow, strong and very well armoured. I used Stormcast Eternal legs and the torsos from the Kataphron kit to give a really chunky industrial look, and used Kataphron heads as well to tie them in with my Zombie Linemen. The arms were a bit hit and miss – I kind of tried for an asymmetrical heavy-lifting idea on their right hand side, but I’m not sure how well that came off. I also got lazy and used a servo-arm on the one guy, and the grabber from a servo-arm on the other, and wish I hadn’t. I think they look awkward and skinny, but done is done. Here they are – see what you think:

To be honest, these are my least favourite models in the project, but I’m not going to lose any sleep over it – I can always revisit this in the future after all. The important thing is that the team is now complete, and here they are – the Clockwork Orange in all their glory: 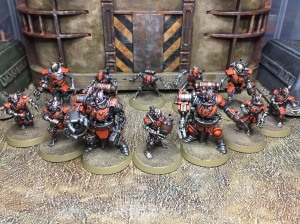 Now… time to get immersed in the Chapel >:-)