Hi guys, what an exciting day! I’ve finished my first warband member, who just happens to be the leader. It gives me great pleasure to introduce you to Lindethiel Gladesinger: 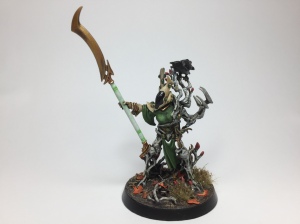 I am particularly pleased with my attempts to turn the male Spiritseer into a female – one thing I really wanted to do in my warband was to take advantage of the lack of gender bias in Eldar lore and have some really strong female characters. I’m chuffed with my attempt to sculpt breasts – hopefully they are realistic and not in any way crass.

I stuck with a very restricted palette of whites, greens, gold and bone for Lindethiel – a scheme that I intend to carry throughout the warband. I really like the interplay of this scheme – the bone suggests death while the green speaks of life, and the gold and gems suggest a grandeur that is offset by the faded and tired looking white of the silver birch. It is far more of a fantasy palette than a sci-fi one really – perfect for Exodites, and I think the crow really adds something in that regard as well.

The actual painting was a challenge… I’m not very well practiced in hard armour plates, so the arms, head and back vane were a slog. Also gems…. Lots of gems…. They ain’t the best I have ever painted – I think I misjudged the colour choice here, and I still have a lot to learn about painting in green, (figuring out what shades worked well together and so on). That said, the robes came out well, and I think the gems look effective en masse. The bit that gave me the most grief was actually the gold on the blade… it’s a big area to cover, and a funny shape to highlight. I’m still pleased with the result though – the palette really helps to distract the eye from some of the dodgier bits I hope :-)

Conceptually, she is a Spiritseer for my Exodites – a group that use psychically responsive wood in place of Wraithbone. I hope that this is a not-too-difficult leap for people, as I think it ties in rather nicely with the Albino Forest, which in turn forms an important part of the story arc for The Chapel project. I like that it gives me options in terms of coming up with a reason for my warband to be there – always a good start for any narrative-driven game :-)

With that in mind, here’s some fluff for you:

Lindethiel Gladesinger slept deeply, her thoughts slowing as they weaved through the vastness of the wraith-realm, lulled by the quiet insistence with which it called to her. Her dreams carried her far and wide, deep and high, as she tasted the rivers of sap ebbing and flowing through the forests, heard the echo of crystal caves that no mortal eyes would ever see, swam deep in underground lakes of icy vastness, listened to the scurry and struggle of life in all its forms… Beneath all of this pulsed the fiery molten ocean at the heart of the world – a steady throb of life force that resonated throughout the planet. The harmonies were beguiling, rising and falling with each languorous turn of her awareness, the soothing melodies running counterpoint to the primordial undertone. The wraith-realm sang its sweet song to Lindethiel, calling on her to merge her consciousness with the spiritual gestalt that included the very soul of this world, as well as those of her ancestors. Her life had been one of long service to her people, and she was now ready for peace. Deeper and deeper she drifted, her thoughts slowed and were gradually subsumed further into the world spirit, just as her body was slowly absorbed into the sacred forest grove of her people.

Day? Weeks? Months later? It didn’t matter anymore. Her drifting had taken on a timeless quality, and Lindethiel was barely aware of herself as her merging approached completion. Suddenly, a discordant note plucked at her fading consciousness – a single tone that rang false in the greater soundscape of the world, arresting her descent into oblivion. A sense of wrongness bled into the spirit realm, changing the serene beauty to something sinister and fearful. Lindethiel felt her individuality increasing as the world spirit began convulsing, pushing her back towards consciousness and the world of the living. She gathered her identity with a sense of resignation as she rose through layers of her own awareness, sending strands of consciousness out into the world, seeking out the source of the discord… She soon found it – a stream of psychic defilement that emanated from the hidden webway that connected her world to the wider Eldar diaspora. It spread like a bruise, corrupted like an infection, and it defied all of Lindethiel’s attempts to comprehend. At first she feared it might be the taint of chaos, but this was unlike any daemonic incursion that she had ever experienced… this felt older, and it didn’t have the distinctive emotional drives of the great powers… no hunger, no lust, no malice or rage, no urge to corrupt or enslave… the only emotion that she could perceive was one of utter despair, and an overwhelming sense of nihilistic futility… Lindethiel could only conceptualise the incursion with one word – ‘Ending’, and she knew that her world and her people were in dire peril. Reluctantly, she forced her consciousness back towards her body.

Lindethiel awoke. It took her a few moments to adjust to her return to consciousness. She would have fallen, but her body was already in an advanced state of petrification, and she remained rooted to the ground. Just like her ancestors before her, she had come to the sacred grove to pass from the world of the living. The process saw the physical body transform into Wychwood, while the soul travelled through the psychically conductive medium to join the world spirit. In many ways, Wychwood served her people in the same way as the Wraithbone of her Craftworld kin, indeed, this natural repository for the souls of the dead was probably one of the reasons why her ancestors had chosen this planet to be their Exodite home so many generations ago. Now, drawn back to physical life and torn from a deeper spiritual existence, she stood in the dappled shade of the sacred grove, the majority of her body already turned to psychically responsive wood. Lindethiel was unconcerned by her altered state. She had trained and mastered the way of the Shaper throughout her long life, and was able to mould the material to her will with the merest thought. In emergencies, she could even use the wood to create body-constructs capable of being inhabited by the spirits of the dead, so it was no effort to animate the parts of her body that had become petrified.

She glanced down and considered her physical form. Her legs and left arm and torso had already transformed into iron-hard Wychwood, smooth-barked and pale in the beams of soft sunlight, while her head and right side remained flesh. With a though, she began pushing her will deep into the tissues of the wood, and felt it grow supple and obedient to her bidding. Lindethiel began to feel sensation from her new body, and it began to flex and sway as she strengthened her control of the Wychwood. After some time, she felt she had sufficient mastery to withdraw the roots that anchored her to the ground, and to begin walking – haltingly at first, but gathering speed as she gained control of her new body. By the time she reached the edge of the clearing, Lindethiel was moving with all of the grace and fluidity that characterised her race. She began to run soundlessly through the forest, ducking low branches and leaping fallen logs and streams. The untiring Wychwood of her body pushing her faster and further than would be possible for any creature of pure flesh, blood and bone. She knew that she needed to get back to her clan settlement, and that she needed to convince the royal court to sanction an expedition to investigate the source of the sickness that was polluting their world. It would mean a dangerous hunt through the webway to an unknown destination to face an alien threat. The risks were high, but then so were the stakes, for Lindethiel knew that whoever joined the hunt would carry the fate of their world in their hands…

So there we have it, my first warband member, and as far as I know the world’s first and only Eldar/Dryad Exodite! I hope you like her as much as I do :-)