Hello again! I don’t know about you guys, but I found that I started to get a bit bored with painting troops in the same format, over and over, so I decided to do a few Elite slot entries in between the other jobs. I find that Elites are good fun – they are usually small in number, they have plenty of scope for conversion, and they are great for breaking up a larger project.

Like most Guard players under the last codex, I knew that I wanted ‘one man army’ Marbo on the roster, (so sad that he isn’t in the new codex…). I had a good look around the interweb to see what others had done with the idea, and saw plenty of jungle-style Rambo/Arnie models, but I didn’t feel that this was right for my Praetorians. Instead, I settled on a desert theme for my stealthy killer, with just a few key colours to tie him in with the rest of the force. So, Cpl. Lawrence ‘the desert scorpion’ was born…

“Lawrence is the son of a petty under-hive crook who was murdered as part of a long-standing gang feud. His mother fled to the ash wastes with her infant son to escape further retribution, and Lawrence developed a fierce independence and a wide range of survival skills while growing up amongst the desert nomads. By adulthood, Lawrence had developed into a fierce, silent and efficient warrior, and in keeping with the desert traditions, set about avenging his father. He sneaked back into Hive Victoria, and set about systematically eliminating the gangs that he held responsible for the murder, with a cold and brutal approach. The size of the task presented a problem – there were too many to kill individually, but Lawrence had certain flair with explosives… Unfortunately, while effective, the violence unleashed was of such scale that the hive authorities took notice. After several weeks, Lawrence had completed his mission – both gangs responsible for the killing were dead, but unknown to Lawrence, the net cast by the authorities was drawing ever tighter. Inevitably, he was captured while attempting to escape Victoria.

His crimes had certainly earned Lawrence execution, but ever a pragmatic people, the administration of Praetoria realised that Lawrence had actually done a great service in single-handedly ridding Victoria of two notorious gangs. Those in power therefore determined that a killer of such skill should not be wasted, but securing the willing obedience of such an independent spirit was considered unlikely – Lawrence needed to be tamed in order to be useful. The expedient solution was to hunt down and capture his mother as insurance against his obedience… or at least convince Lawrence that this was the case. The authorities did manage to track and imprison his mother, and she was shown to Lawrence – his choice was therefore made simple: ‘Obey, kill, bleed, die if necessary, in the service of your Emperor, or your mother will be punished in the most painful and degrading ways imaginable’. Left with no choice, Lawrence agreed to serve, but unbeknown to Lawrence, his mother died shortly after his last meeting with her. Whether this was suicide, accident or execution is not clear, but the facts are considered irrelevant, only Lawrence’s continued ignorance of her death is important. He was hastily posted with the 215th with specific instructions that he be kept off-world, separated from the ranks, and assigned to only the most dangerous infiltration missions. His survival is very much optional, for every day he lives increases the chance of him learning the truth. Should this happen, the results would be… unfortunate.”

With that background, I had a good look for a suitable base model in my old bits, and saw a chance to bring one of my 20 year old Tallarn models back to the table. This is the resulting conversion, with a big emphasis on the demo charge: 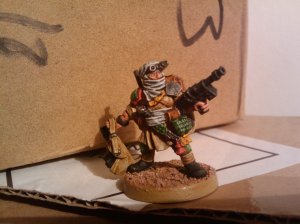 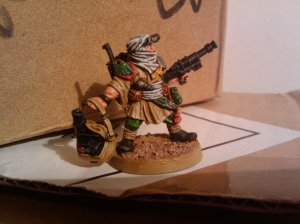