Ok, so not the bears, but continuing with the Elites slots, I decided to get me some Ratlings and what was (at the time) a psyker battle squad added to the roster…

For the snipers, I initially wanted to use street urchins as counts-as replacements… (think ‘Oliver’ but with rifles), but I couldn’t find anything out there that would work as a base model. I also considered the ‘Weird War’ WWII tommy style halflings, (which I love), but thought that would be a bit out of context. The solution was actually close to hand. I had some old ratlings in the bits box, and on closer inspection I realised that their uniforms are actually pretty well matched to the Praetorian theme. A bit of paint stripping and some head/hat swapery (Curious Constructs and Victoria Miniatures bits) provided 10 new dudes to fight for the honour of Praetoria. I am happy with the results, they seem to fit right in and really look the part, though I admit, They’re not very stealthy looking… I’m thinking of doing a load more actually, as I quite like the thought of having the option to field tons of the little buggers as conscripts. Anyhow, here they are: 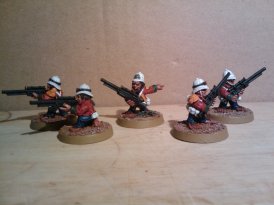 I also completed a psyker battle squad around the same time, complete with an old Mordian Sgt. to act as overseer. I had to shop around for the psyker models, the standard GW psykers are just a bit naff in my opinion, (especially the one with the migraine!), and I’m not sold on the cadian/flaggelant conversions that seem popular either… In the end I went with some ‘cultist tunnel guard’, (don’t remember what game but I got them from Heresy Miniatures), which had just the skinny/maltreated look that I wanted. I imagine that these freaks are kept locked up in pretty awful conditions when not being unleashed in battle… all very Victorian! All the psykers had staffs of various sorts but I was struggling to model pistols on the bodies convincingly, so instead I worked the pistols into the staff heads. I’m chuffed with how they turned out – they certainly look grimdark enough to be something you would see in 40k. The skin tones were good fun as well, in fact the whole slapdash approach made a really nice change! I am particularly pleased with the eyes – they have a blasted, Davros vibe about them that I love:

Of course, all of these were added under 6th edition and previous codex… I know ratlings seemed to get a bad press at the time, but I really liked the little fella’s. They dropped more than their fair share of enemies for me, (including a Great Unclean One!), but I don’t know how they will do under 7th. I know that they lost pinning and gained ‘shoot & scarper’, but whether this is good or not remains to be seen. I will test them out and report… The PBS on the other hand is clearly going to be more useful in 7th… rolling twice on a proper table will make them a much stronger unit overall, and the ‘brotherhood’ rule will be particularly useful for soaking up perils induced wounds when dabbling with Daemonology. More of these guys needed I think… I can’t wait to do some testing with them!

Hope you are liking what you see – don’t be shy with comments etc :-)